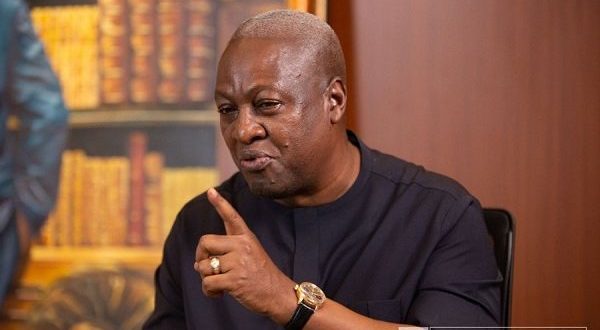 Former President John Dramani Mahama has slammed Members of Parliament from the Majority caucus and cabinet ministers who chose to fly to Qatar to cheer the Black Stars at the ongoing World Cup instead of participating in the 2023 budget debate.

Mr Mahama addressing the 13th Congregation of the Accra Business School on Saturday, December 3, described the behaviour of the NPP MPs as an unprecedented dereliction of duty in the history of Ghana.

“In the wake of all these disturbing happenings, government MPs and cabinet ministers seem to have no interest in appearing as the people’s representatives to debate the government’s own budget for 2023. Many have rather chosen and have been permitted to go on vacation to go and cheer the Black Stars.

“Only a handful of MPs on the minority side have shown up in Parliament this week to participate in the budget debate and defend the policy choices therein. I dare say never has a government shown disinterest in working on its own budget at a time of great economic crisis and suffering, during which utmost seriousness and urgency are required to address the problems that we face.

“This represents an unprecedented dereliction of duty and responsibility, and I think the President must be putting his foot down on this.”

Parliament on Tuesday, November 29, began the debate on the 2023 budget, which is considered crucial to the government’s efforts to reach an agreement with the International Monetary Fund for a bailout.

But on the day the debate commenced, less than 30 NPP MPs were in the Chamber to participate in the Budget debate.

Subsequently, photos of some leading cabinet ministers in Qatar including the Minister for Communications and Digitalisation Ursula Owusu-Ekuful surfaced online, attracting condemnation by some Ghanaians who described the development as insensitive.

A technical advisor at the Office of the Vice President, Dr Kabiru Mahama, has also condemned some of the cabinet ministers and NPP MPs who abandoned parliamentary work to cheer the Black Stars.

Speaking on the Big Issue on Citi TV/Citi FM, Dr. Mahama said President Akufo-Addo would be appalled by the lack of critical reflection by the MPs.

“I am sure that this is something the President will be very appalled at because the Members of Parliament are expected to sit through the debate of the budget.

“That exercise of discretion by the cabinet ministers involved in this particular case was exercised without critical reflection on the situation because nothing justifies the fact that you are in this situation, and you go to Qatar to cheer the Black Stars.”

I'm Adwenpa-Hene |Blogger & Broadcaster Journalist. I am the CEO and manager of this noble website. I publish on Entertainment, Sports, Politics, Lifestyle, and Technology. You can also follow Us on : YouTube Channel - My Ghana Media TV, Facebook - MyghanaMedia TV , Twitter - @MyGhanamedia2 & Instagram - My Ghana Media TV. Email Address: [email protected] Contact Us: 0200818719
@@MyGhanamedia2
Previous Government Hasn’t Paid Us Since 2018 – Road Contractors
Next All Smiles As Dr. Bawumia Meets Ken Agyapong At funeral