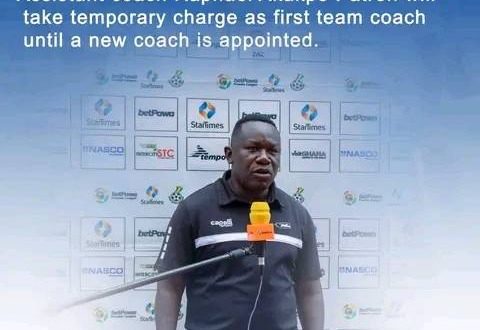 The Akyem Oda based club in August this year announced the appointed of the former Ghana Under-17 player  as their head coach.

A club statement said: “The management wish coach Ablade all the best in his future endeavours and also thank him for all the hard work and fond memories he shared with the club. Meanwhile, assistant coach Raphael Patron Akakpo has been instructed to take charge as the head coach pending when a substantial head coach is appointed by the club management”

The club statement added: “Royals will be play host to Legon Cities in their next league fixture at the Cape Coast stadium on the 23rd of December upon the resumption of the league.”

The 39-year-old is a former Ghana youth international and played for premier league clubs in Poland, Albania, and Finland, where he lived for nearly two decades.

He was a member of the Black Starlets team that won bronze at the 1999 FIFA U-17 World Cup in New Zealand.