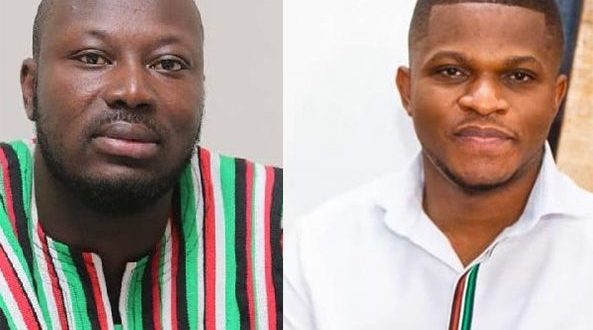 The National Youth Organizer of the Opposition National Democratic Congress, NDC, George Opare Addo has repelled the attacks mounted on him, by the Party’s Communication officer Sammy Gyamfi over his reelection as the party Youth leader.

Sammy Gyamfi as gathered has declared war on the Party Youth Organiser on the claims that he is anti–John Mahama and openly campaigned for his friend Yaw Brogya Genfi to be elected National Youth Organizer but lost by 25 votes at the just-ended Women’s and Youth elections of the party.

After the just-ended conference held at Cape Coast, Sammy Gyamfi allegedly launched attacks on the reelected National Youth Organiser in a series of posts.

However, George Opare Addo popularly called Pablo who won his reelection bid with a slim margin against Yaw Brogya Genfi, said Sammy Gyamfi has become an obstacle he has to deal with.

In a live radio interview on Power Fm, Opare Addo dared Sammy Gyamfi on air to explain how he owned the plush property.

“Yes, Sammy Gyamfi has now become an obstacle and in my way and this is my second term I will not joke! I will cut away anybody who stands in my way as an obstacle. It is the only action that we will see. Action action action….” Opare Addo said.
He dared Sammy Gyamfi to explain how he built a house at Airport Hills and what work he does.

“Mugabe, ask Sammy Gyamfi how he built a house at Airport Hills, what work does he do?” he asked.

“I called him twice for us to meet at my Dzorwulu office, ask him. He was at Peace FM. I called him to come for us to sit and talk so that we can work together. So what is my crime?” Opare Addo revealed.

“I told him (Sammy Gyamfi) that the situation where he passes the other way when I pass one way will not help the party and I want is to work together to bring NDC to power, ask him if I am lying” Opare Addo revealed.