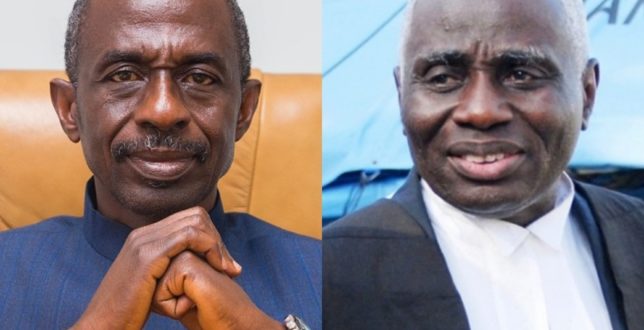 The General Secretary of the opposition National Democratic Congress (NDC), Johnson Asiedu Nketia, has revealed that the party’s longstanding lawyer, Tsatsu Tsikata, had initial qualms about the NDC’s 2020 election petition.

According to him, the respected legal practitioner first doubted the substance of the case, even though he eventually represented the party in the case.

Speaking in what is believed to be a recording of a leaked address to some party faithful, Asiedu Nketia said Mr. Tsikata’s initial hesitance was due to the fact that the collated results supervised by the party’s National Chairman was poorly done.

He said the NDC had no collated results, and thus Mr Tsikata rejected the first set of documentation which the party was seeking to rely on to challenge the Electoral Commission’s declaration in Court.

Speaking in the local Twi dialect, he said, “The collated results which were given to me was nothing to write home about.

If I had presented it any court, I would have been embarrassed”.

He continued, “So we consulted Tsatsu Tsikata on the matter. The following day, he returned our documents; stating that if this is what we have, then we have no case and that he cannot represent the party, so we should look for another lawyer”, Asiedu Nketia revealed.

In his remarks, ‘General Mosquito’ further alleged that the NDC’s National Chairman, Samuel Ofosu-Ampofo, was the brain behind the party’s inability to effectively collate its results.

He said the system Mr Ofosu-Ampofo brought was not effective, and broke down midway into the collation.

This, he said, subsequently affected his role as the party’s star witness in the 2020 election petition hearing.

He however assured his audience that the perennial lapses with the party’s collation of election results will be a thing of the past if he is elected as the NDC’s next Chairman.

The disclosure by the NDC stalwart has so far been met with mixed reactions by the general public as well as members of the NDC in particular.

The revelations appear to have sparked an uneasy calm in the NDC, with some party members accusing him of divulging sensitive information in his parochial bid to unseat Mr. Ofosu-Ampofo.

According to his critics, his comments were in bad taste, as they can breed mistrust and irreconcilable difference in the party, even after the upcoming polls on Saturday.

His sympathisers have however applauded him for his truthful and bold revelations which they believe can set the tone for healthy reforms for the party in the future.

Currently, Mr. Ofosu Ampofo’s role as the NDC’s National Chairman is being threatened by the decision of the party’s General Secretary, Johnson Asiedu Nketia to unseat him.

In what has been described as the main contest in the party’s upcoming National Delegates Congress, Mr. Asiedu Nketia is frantically taking steps to take control of the party as National Chairman ahead of the 2024 general election.

But the incumbent, Samuel Ofosu-Ampofo, says there have been attempts by party bigwigs to stop Asiedu Nketia from competing him.

In an earlier interview on Adom TV, he told host, Daakyehene Nana Yaw Asante, that the party’s 2020 flagbearer, John Dramani Mahama, and other prominent NDC figures made efforts to stop the contest between himself and the party’s General Secretary, Johnson Asiedu Nketia.

According to him, even though the move by Asiedu Nketia to unseat him is politically incorrect; the efforts to talk him out of the decision proved futile.

Eligible party delegates will however be presented with an opportunity to elect a new crop of executives to man the affairs of the party on Saturday December 17, at the Accra Sports Stadium.

This comes after the NDC’s Youth and Women’s Congress which was held last week Saturday at the University of Cape Coast.

In that contest, the incumbent National Youth Organiser of the NDC, George Opare Addo, retained his position after a keenly contested election.

Pablo, as he is affectionately called, beat his sole contender, Yaw Brogya Genfi by obtaining 533 votes.

Brogya Genfi, who was the Ashanti Regional Youth Organiser, failed to annex the portfolio, after amassing a total of 508 votes of the valid votes cast.

Pablo’s win marked his second successive victory over Brogya Genfi, after beating him in the 2018 contest.

Having retained his seat, Pablo, a trained lawyer, will serve as the leader of the party’s Youth wing for the next four years; leading the NDC’s youth into the 2024 general elections.

In the race for the party’s Deputy National Organiser, Osman Abdulai Ayariga and Ruth Dela Seddoh emerged victorious in that regard.

Ruth, who is the incumbent garnered 313 votes, while Osman Ayariga led the race with 373 votes.

I'm Adwenpa-Hene |Blogger & Broadcaster Journalist. I am the CEO and manager of this noble website. I publish on Entertainment, Sports, Politics, Lifestyle, and Technology. You can also follow Us on : YouTube Channel - My Ghana Media TV, Facebook - MyghanaMedia TV , Twitter - @MyGhanamedia2 & Instagram - My Ghana Media TV. Email Address: [email protected] Contact Us: 0200818719
@@MyGhanamedia2
Previous Ghana’s Cedi Appreciates As $1 Now Goes For ¢10.70
Next Over 50 Shops In Abossey Okai Closed Due To Default In Loan Repayment