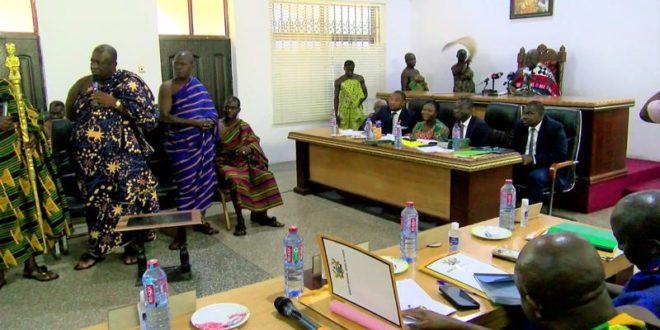 Asantehene To Summon Chiefs Whose Lands Have Been Invaded By ‘Galamseyers’

Chiefs in the Ashanti Region who have had their lands invaded by illegal miners will be summoned by the Asantehene for questioning and possible sanctions.

He says the failure of some chiefs to reject illicit concessions have contributed to the unending fight against ‘galamsey.’

“Next year, any Chief whose lands have been invaded will have to be summoned and questioned. If we visit your land and it has been destroyed by ‘galamsey’ activities, we will question why you watched unconcerned for the lands and water bodies under your custody to be harmed. And if you’re unable to give valid reasons, we will sanction you so you learn a lesson and protect your land from the havoc,” Otumfour emphasized.

The Asantehene’s comments follow an appeal by chiefs in the Ashanti Region to be granted summoning powers to help in the fight against ‘galamsey.’

Speaking at a general meeting of the Ashanti Regional House of Chiefs, Otumfuo Osei Tutu II noted that chiefs who allow their communities to be invaded by ‘galamsey’ are complicit in the act.

“If the miners appear before you that they have mining rights and you allow them to destroy your water sources and lands then you are complicit. If we don’t fight it but rather take bribes from them to enrich yourself, what about the people you rule? Let’s be honest. Some chiefs are contributing to the menace,” the occupant of the Golden Stool said.

Illegal mining continues to wreak havoc in many parts of the Ashanti Region, predominantly in the areas along the Offin River.

Water bodies and agriculture plantations have been damaged as a result of the illegal mining menace.

Peeved by the observation, the Asantehene disagreed with assertions that traditional councils lack the power to reject mining activities on their lands.

“We are the custodians of the lands. We swore allegiance to protect them. But when foreigners visit the lands and begin to destroy it, did you say anything about it? Because of the penny they paid to you, they should destroy the land and water? Indeed, the politicians are misbehaving, but we as traditional leaders should play our part to reject any concessions. And because of that the government would kill us, then they should go ahead,” the Asantehene said.

A Luv News report in 2021 revealed that fully armed military officers provided protection to miners degrading the forest reserves of Manso in the Ashanti Region.

“Some chiefs are worried. They sometimes visit illegal mining sites and would see the miners being protected by the Military or Police. Who sent the Police or soldier there? If you should ask the Ashanti Regional Commander who deployed them there, he wouldn’t be able to substantiate their deployment. Why must this happen?,” the occupant of the Silver Stool of the Asante kingdom quizzed.

I'm Adwenpa-Hene |Blogger & Broadcaster Journalist. I am the CEO and manager of this noble website. I publish on Entertainment, Sports, Politics, Lifestyle, and Technology. You can also follow Us on : YouTube Channel - My Ghana Media TV, Facebook - MyghanaMedia TV , Twitter - @MyGhanamedia2 & Instagram - My Ghana Media TV. Email Address: [email protected] Contact Us: 0200818719
@@MyGhanamedia2
Previous Man Who Slapped Greater Accra Regional Minister Granted Bail
Next Special Prosecutor And His Staff Are Yet To Receive Salary After 16 Months In Office