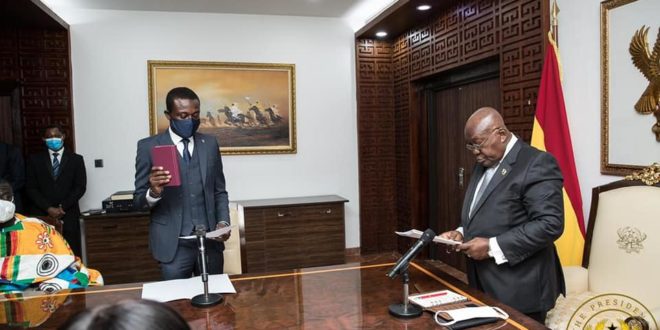 Exclusive documents available indicates that the Special Prosecutor, Kissi Agyebeng and his staff are yet to receive their salaries, sixteen months after assuming office.

According to the said documents, only the Deputy Special Prosecutor has been paid; leaving other staff of the office agitated.

Reacting to this development, the Special Prosecutor, Kissi Agyebeng, says the situation can potentially derail the fight against corruption, since the unpaid staff are left in a vulnerable state.

He, therefore, wants urgent steps taken to rectify the existing compensation issues within his Office.

Minority Leader, Haruna Iddirisu also says, the development is evidence of Akufo-Addo’s superficial commitment to the fight against corruption.

Speaking in an exclusive interview with JoyNews, he noted that the failure of government to pay staff of the Office of the Special Prosecutor is an indictment on the whole purpose of establishing the Office.

The MP continued, “President Nana Addo from day one, has never ever been committed to the fight against corruption. He just set up the bureaucracy for the finesse of it. That I have an Office of the Special Prosecutor to compliment the Attorney General in fighting corruption”.

He further quizzed: “In any case, which matter of corruption is before the court?”

Special Prosecutor yet to receive salary after 16 months in office. #JoyNews pic.twitter.com/JDIUb8KfFO

Meanwhile, the Finance Minister, Ken Ofori-Atta, is expected to appear before the Legal and Constitutional Affairs Committee of Parliament today in a closed session, to explain why the Special Prosecutor and his staff are not receiving salary.

I'm Adwenpa-Hene |Blogger & Broadcaster Journalist. I am the CEO and manager of this noble website. I publish on Entertainment, Sports, Politics, Lifestyle, and Technology. You can also follow Us on : YouTube Channel - My Ghana Media TV, Facebook - MyghanaMedia TV , Twitter - @MyGhanamedia2 & Instagram - My Ghana Media TV. Email Address: [email protected] Contact Us: 0200818719
@@MyGhanamedia2
Previous Asantehene To Summon Chiefs Whose Lands Have Been Invaded By ‘Galamseyers’
Next UK Sees Largest Nursing Strike In NHS History