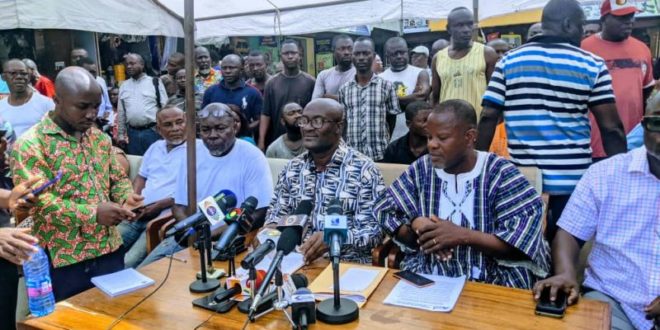 The GPRTU after a slight reduction in fuel prices refused to reduce transport fares arguing that prices of spare parts and lubricants have also been increased. Thus, if transport fares are reduced, transport operators may suffer a loss in income.

However, the Abossey Okai Spare Parts Dealers Association in a statement on December 15 said prices of spare parts have not been increased.

“GPRTU instead of reducing the transport fares as a result of the reduction of fuel prices has remained adamant and does not want to do that.

“They are now attributing their failure to reduce prices of the transport fares too high prices of spare parts. It is against this background that we are holding this press conference to let the Ghanaian public know that what they are saying is not true,” the Spare Parts dealers said

The Association explained that it has a tradition of reducing the prices of spare parts in November every year to help customers service their vehicles for the Christmas holidays.

According to the spare parts dealers, they are currently adjusting prices due to the current appreciation of the cedi against the dollar.

“We, therefore, want Ghanaians to disregard the propaganda that the GPRTU is waging as it has been their tradition over the years whenever they are called upon to reduce transport fares.

“We wish to let the public know that prices of Spare Parts have been adjusted to respond to the appreciation of the cedi and would urge all customers to go directly to the shops and buy from,” the statement noted.

Meanwhile, JoyNews is learning of a meeting between the Transport Ministry and the transport operators today, Thursday over the reduction of transport fares for customers due to the reduction in fuel prices.