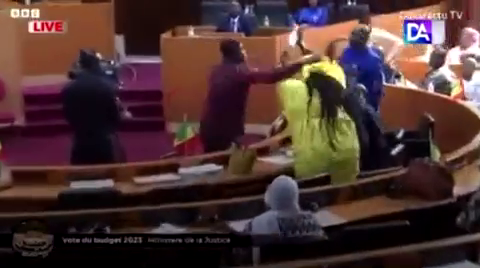 Two opposition Senegalese MPs have been arrested for the alleged assault of their pregnant colleague in parliament earlier this month.

It follows the chaos that erupted during a budget debate in parliament, in scenes that were televised. The video of the fight was shared widely on social media.

Massata Samb is said to have slapped the female MP, Amy Ndiaye Gniby, after she scoffed at him during the debate.

She threw a chair at him before another MP, Mamadou Niang, kicked her in the stomach after she was pushed to the ground.

Both Mr Samb and Mr Niang have been detained and are charged with voluntarily causing hurt, their lawyer told the Reuters news agency, adding that the detention violated their parliamentary immunity.

They are expected appear in court on Monday.

You can watch the brawl here: