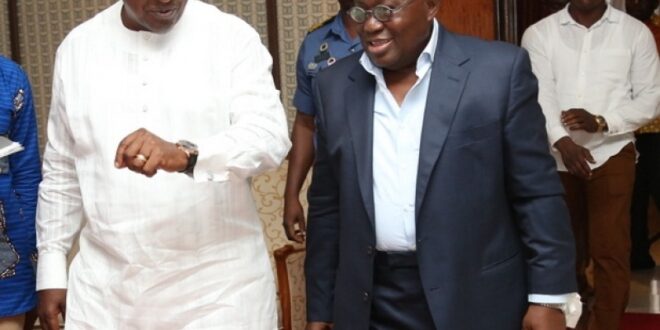 Mahama To Akufo-Addo: After Begging World Leaders Over IMF, You Are Cautioning African Leaders Against Same

Former President John Mahama is worried about a stance taken by President Akufo-Akufo on funding for the country.

The National Democratic Congress (NDC) leader finds it morally questionable that Nana Akufo-Addo is able to urge other African leaders against begging when the country is just going for a bailout from the International Monetary Fund (IMF).

During the opening of the US-Africa Leaders’ Summit in Washington DC earlier this week, the President told fellow countries on the continent to wean themselves off “begging” the West to earn global respect and change poor perceptions about the continent.

“We have a President who enjoys spouting the rhetorics of self-respect and restraint from begging western nations for support, yet he has spent the last several weeks on the telephone with western leaders asking them to beg the IMF to grant Ghana the recently announced staff-level agreement for an extended credit facility,” he told Delegates.

According to him, President Akufo-Addo has “reduced the country to a beggar nation.”

“Our dear nation has never been so put to shame and come close to being a beggar nation as we are today,” he added.

The congress will see some 9,200 delegates partake in the elections at the Accra Sports Stadium.

I'm Adwenpa-Hene |Blogger & Broadcaster Journalist. I am the CEO and manager of this noble website. I publish on Entertainment, Sports, Politics, Lifestyle, and Technology. You can also follow Us on : YouTube Channel - My Ghana Media TV, Facebook - MyghanaMedia TV , Twitter - @MyGhanamedia2 & Instagram - My Ghana Media TV. Email Address: [email protected] Contact Us: 0200818719
@@MyGhanamedia2
Previous 2024 Elections: “We Need A Healthy NDC, We Don’t Want To Defeat A Limping Horse” – NPP
Next Volta Region: Five People Gunned Down In Chieftaincy Dispute, 15 Arrested