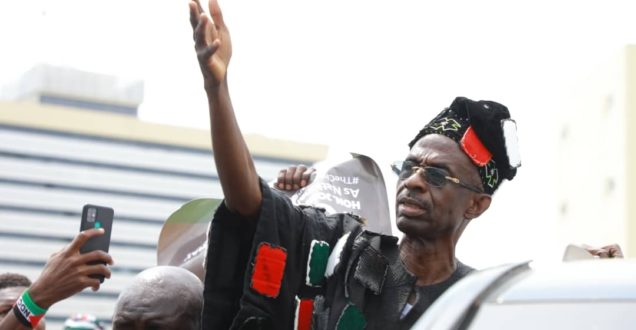 The outgoing General Secretary of the opposition National Democratic Congress (NDC), Johnson Asiedu Nketiah has launched verbal attacks on the Supreme Court for being biased against the NDC after filing the 2020 election petition of Presidential results as announced by the Electoral Commission (EC).

According to him, the Supreme Court failed to allow the Chair of the EC, Jean Mensa to account for her stewardship following her refusal to mount the witness box to be cross examined.

The NDC Scribe who was justifying his comments just few days after explaining his inability to produce any result in court to challenge the figures of the EC said at the delegates congress of the NDC at the Accra Sports Stadium on Saturday December 17, 2022 that the EC was a biased umpire in the conduct of the 2020 election.

He said “we had a Supreme Court that threw common sense, fact and logic to the wind and denied the people of Ghana the opportunity to hold the Chairperson of the Electoral Commission to account for her stewardship as the sole returning officer for the presidential election.”

He added “we lost the case in court but won in the court of public opinion.”

He told delegates of the NDC in the Bono and Bono East regions ahead of Saturday’s Conference that, the IT system that was brought by the party’s Director of IT, Osei Kwame Griffiths who was appointed by Chairman Samuel Ofosu-Ampofo, for the collation of results was not good enough for the purpose.

Accoriding to him, the system crashed just after collating five regions, leading to the NDC’s inability to get the results in real time to challenge the figures of the Electoral Commission.

The NDC after the official declaration of the results by the Chair of the EC Jean Mensa, formed a committee with Mr Ofosu-Ampofo as its head, to go round the country to manually collect pink sheets to enable the party to challenge the results at the Supreme Court.

Speaking futher, Mr Nketiah said, he personally told the committee that the results that had been collated manually were not good enough to back the case in court. Doing so, he said, was going to lead to embarrassment and that, he was not prepared to go through that situation.

“When the same results were presented to lead counsel of the NDC Tsatsu Tsikata, he also raised reservations about them and said he was not prepared to proceed with the case with these kinds of documents submitted to him”, Mr Nketiah further revealed.

“Mr Tsikata then suggested the strategy to file an application to compel Mrs Jean Mensa to produce the documents in the custody of the EC, an application which was unanimously dismissed by the court”.

He assured the delegates of the party that these won’t happen if he is elected, adding that per the NDC’s constitution, all the executives report to him hence, in that sense, he will accept part of the blame but the ultimate should go to the National Chairman.

He told the delegates that “…Joshua Akamba said at the meeting that the one tipped to be appointed Director of IT Griffiths and Dr Bawumia had some dealings and so it was not prudent to appoint him as head of IT. This was not heeded and the appointment was done”.

“That resulted in the kind of system he brought for the collation of results which he described as robust but after collating just five regions the system crashed. That was why we couldn’t collate our results at the right time to challenge the EC”.

“We believed that President AKufo-Addo didn’t win the elections, even if he did, it wasn’t in the first round but where were the results from our side to challenge the EC? We decided to form a committee to do the manual collation, we sent people around to collect the pink sheets, Chairman Ofosu Ampofo said he would do the collation himself.

“They then suggested that we should go to Lawyer Tsikata with the kind of results they brought. Lawyer Tsikata looked at the documents and returned them to us that they were not good enough and he was not prepared to proceed with the case with such evidence.

“He even thought that the EC violated the electoral laws and so the only option was to get Jean Mensa to mount the witness box to produce the information for us to proceed on that tangent. That was why when I was asked where my results were I said I didn’t bring any results. If I become the chairman of the party, these things won’t happen.”