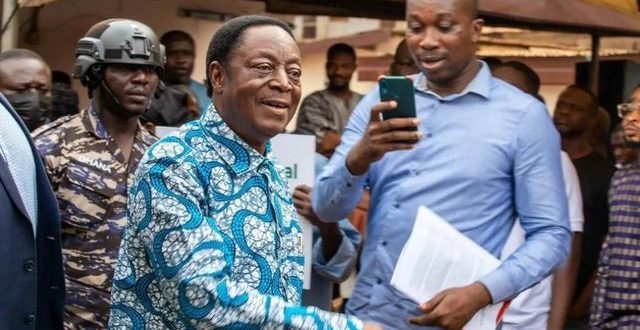 Thousands of supporters of the National Democratic Congress (NDC) have stated that the series of attacks, threats and blame games meted out to the NDC Presidential hopeful, Dr. Kwabena Duffuor by some self seeking elements of the NDC including the Vice Chairman of the party in the Klottey Korley Consistency, Mr. Julius Neequaye Kotey aka Logas are unfortunate, regrettable, worrying and unacceptable.

According to the supporters of the NDC who are predominantly the youths, they find it extremely difficult to understand why Mr. Neequaye Kotey would attacked the intergrty of Dr. Duffuor because he is contesting the flagbearer-ship position with the former President John Dramani Mahama.

The attacks on the personal life of Dr. Duffuor, they stressed, does not argur well for the peaceful co-existence within the party, saying the NDC is now become the next alternative for Ghanaians to win the political power in the 20224 general election to take the country out of the current economic turmoils.

The pointed out that the decision of Dr. Duffuor to contest the flagbearer-ship race with the former President Dramani Mahama is not a crime, saying that NDC is a social democratic patty which is not against the competition of the position within the party.

They described the outburst meted out to Dr Duffuor by Vice Chair of the party in the Klottey Korley Consistency of the Greater Accra Region as a complete shameful and disgust, calling on the leadership of the party to, immediately call him to order.

See also  ‘We Are Not Interested In Coup D’etat’ – NDC

They educated Mr. Neequaye Kotey that the position of the flagbearer-ship was not reserved for one particular person in the party, saying that the NDC is a political party which is bigger than all of the current personalities who had attained the executive positions of the party.

They stressed the need for the chairman Logas to immediately retract and tender unqualified apology to Dr. Duffuor for wrongly attacking him, since the former Minister of Finance and Economic has not committed any wrong which has demanded for that unwarranted attack from chairman Logas.

It would be recalled that Mr Julius Neequaye Kotey aka Logas in the media reports stated that Dr. Kwabena Duffour will lose woefully to former president Mahama in the party’s flagbearer race.

According to him, Dr. Duffour will not be elected as the party’s flagbearer even if he purchases buses for party offices in the 275 constituencies.

“Dr. Duffour can do all he can humanly possible but he will lose the flagbearer race. We need him to stop all he is doing and support the John Mahama camp. Even if he donates buses to all the constituencies, we will not vote for Dr. Duffour. Even if former President Mahama is on his sick bed we will bring him to contest the flagbearer race,” he stated.

In an interview with Don Kwabena Prah on Happy 98.9 FM’s ‘Epa Hoa Daben’ political talk show, Chairman Logas says the 2024 general elections will be contested on the records of former President Mahama “and so far as he is alive, he will represent the party as flagbearer. Mahama is ready to be sold but Duffour will have to be marketed and we don’t have the time for that now.”

Dr. Duffour launched the Ahotor project which he says is aimed at strengthening the grass roots of the party to win political power in 2024.

He has donated event rental equipment to constituency offices of the NDC to help constituency executives undertake income-generating activities for the day-to-day running of the party.

But in a quick rebuttal, the youths in the party found the criticism meted to Dr. Duffuor as outrageous.

They argued that the attempts to use these seeking seeking individuals including Chairman Logas to malign Dr Duffuor will completely backfire, stressing that Dr Duffuor is an action-oriented person who is campaigning of clearn campaigns by way of telling the delegates of what he do to bring the NDC to power for the 2024 general elections.

They told journalists that the former Minister of Finance and Economic has for long been committed to the idea of industrialization and socioeconomic development.

With his vision of industrialization, the youths of the NDC believes the country will progress economically under the presidency of Dr Duffuor.

I'm Adwenpa-Hene |Blogger & Broadcaster Journalist. I am the CEO and manager of this noble website. I publish on Entertainment, Sports, Politics, Lifestyle, and Technology. You can also follow Us on : YouTube Channel - My Ghana Media TV, Facebook - MyghanaMedia TV , Twitter - @MyGhanamedia2 & Instagram - My Ghana Media TV. Email Address: [email protected] Contact Us: 0200818719
@@MyGhanamedia2
Previous Coup Attempt Foiled In The Gambia
Next My Husband Is Jealous – NDC Lady Tagged As Sammy Gyamfi’s Wife Cries