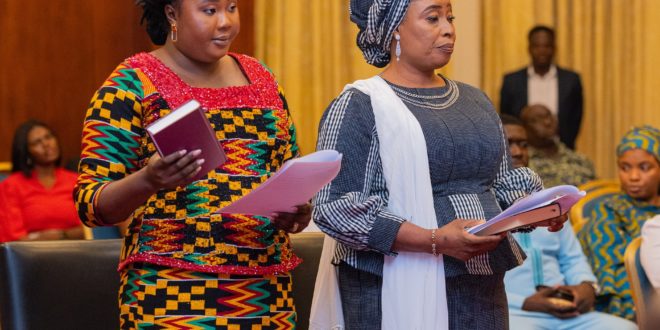 The President of Ghana, H.E Akufo-Addo has charged the newly appointed Minister of Gender, Children and Social Protection, Lariba Zuweira Abudu, and her deputy, Francisca Oteng Mensah, to ensure that throughout their tenure in office, they remain above reproach.

In his speech after swearing in the Minister and her deputy in the Banquet Hall of Jubilee House today (28 December), President Akufo-Addo said the two appointments have come at a crucial moment and that the promotion of the Ghanaian people’s welfare must be both ministers’ most important priority.

“Your appointments have come at a critical time in the history of our country and your success in this endeavour will be a consequence of the oaths you have solemnly sworn to uphold the interest of the Republic, its constitution and its citizenry and to dedicate yourselves to the promotion of their general well-being,” the president said. 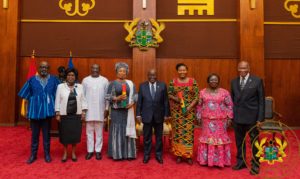 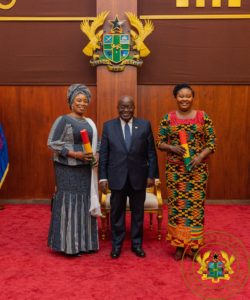 “The quality of integrity which will permeate your work is extremely important. You have to remember at all times, the solemn commitment that we in the New Patriotic Party have made collectively and individually, jointly and severally in the language of the lawyers, to serve the Ghanaian people honestly and competently.
President Akufo-Addo with the Minister of Gender, Children and Social Protection Lariba Zuweira Abudu, and her deputy, Francisca Oteng Mensah

“We are called to these public appointments to provide public service and not to promote our personal gain,” the president said. 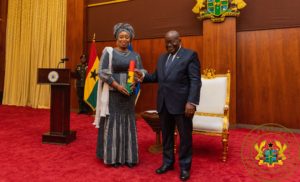 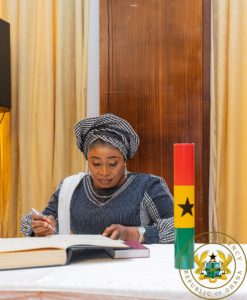 In his remarks, President Akufo-Addo reminded the minister and her deputy to file their assets declaration forms as required by law.

He added that the conduct of all his appointees, including the ones newly sworn in, will go a long way to determine the fortunes of the NPP in the political space of the country in the years to come.

“Do not in this regard fail to file your assets declarations promptly and remain above reproach in your public dealings.

“Your conduct, my conduct, our collective conduct in the executive will determine the fate and fortunes of our party, the New Patriotic Party in these and succeeding decades,” the president said.
Commitment to serve

In her acceptance speech, the new Gender Minister pledged that she and her deputy are committed to making the ministry an enviable organisation worthy of emulation.

Lariba Zuweira Abudu said that they will constantly be knocking on the door of the Chief of Staff in the Office of the President, Akosua Frema Osei-Opare, to find ways to ensure that the many problems bedevilling the ministry are dealt with. 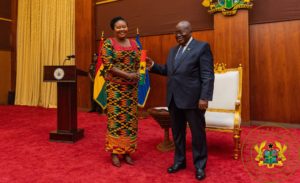 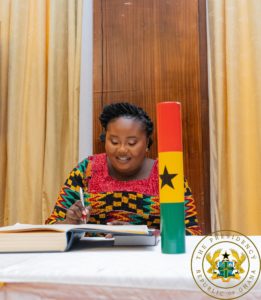 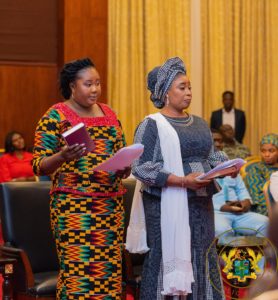 In late July 2022, President Akufo-Addo revoked the appointment of Sarah Adwoa Safo as the Gender, Children and Social Protection Minister.

Before the revocation of her appointment, Safo had come under severe criticism for being continuously absent from her post and from Parliament.

The Speaker of the House, Alban Bagbin, denied media reports suggesting that he had granted her permission to absent herself.
New appointments

On 2 August 2022, in accordance with Article 78 of the constitution, President Akufo-Addo appointed the then deputy minister of gender, children and social protection, Lariba Zuweira Abudu, who is the MP for Walewale in the North East Region, as the minister-designate.

In the same letter communicating the ministerial appointment, President Akufo-Addo, pursuant to Article 79 of the constitution, nominated Francisca Oteng Mensah, the MP for Kwabre East in the Ashanti Region, as the deputy minister-designate.

Both appointments were subject to parliamentary approval.

I'm Adwenpa-Hene |Blogger & Broadcaster Journalist. I am the CEO and manager of this noble website. I publish on Entertainment, Sports, Politics, Lifestyle, and Technology. You can also follow Us on : YouTube Channel - My Ghana Media TV, Facebook - MyghanaMedia TV , Twitter - @MyGhanamedia2 & Instagram - My Ghana Media TV. Email Address: [email protected] Contact Us: 0200818719
@@MyGhanamedia2
Previous NPP Rubbish Reports MP For Hemang Lower Denkyira Was Chased From Party Office
Next God Has Seen Me Through It All – Dome-Kwabenya MP Broke Down In Tears