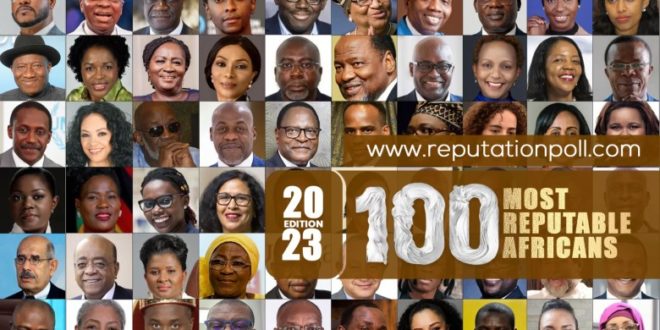 Prof. Jane Naana, Eric Danquah And Eight Other Ghanaians In 2023 List Of 100 Most Reputable Africans

Eric Yirenkyi Danquah, a professor of plant genetics at the West Africa Centre for Crop Improvement (WACCI) in Legon, Accra, and the winner of the 2022 Africa Food Prize at the AGRF2022 Summit in Kigali, Rwanda has been named in the 2013 list of 100 Most Reputable Africans.

The other Ghanaians are Prof Jane Naana Opoku-Agyemang, chancellor of the Women’s University in Africa; and Madam Afua Kyei, chief financial officer at Bank of England.

The selection criteria were integrity, visibility, and impact.

In addition to the individuals recognised on Reputation Poll International’s “100 Most Reputable Africans” list for their various achievements, there are also those who are celebrated for their contributions to social impact and social entrepreneurship, helping to transform businesses in Africa and positively impacting lives without causing controversy.

During the announcement of the list, Beldina Auma, the co-chairperson of the Review and Audit Committee, as well as the chair emeritus of the World Bank Group-IMF African Society, President of SCIP-International, said the organisation was dedicated to recognising people, groups, and businesses who continually improve lives in Africa and around the world.

Below is the list of the 100 Most Reputable people in Africa in alphabetical order;

See also  “We’ll Not Use Taxpayers’ Money For Cathedral”- Spokesperson

I'm Adwenpa-Hene |Blogger & Broadcaster Journalist. I am the CEO and manager of this noble website. I publish on Entertainment, Sports, Politics, Lifestyle, and Technology. You can also follow Us on : YouTube Channel - My Ghana Media TV, Facebook - MyghanaMedia TV , Twitter - @MyGhanamedia2 & Instagram - My Ghana Media TV. Email Address: [email protected] Contact Us: 0200818719
@@MyGhanamedia2
Previous Authoroties Of UG Reminds Students Of Ban On All Gatherings And Events On Campus
Next Hon Yentumi Dines With Orphans, Donates Items With An Undisclosed Amount Of Money To The Heart Smiles Organisation Children’s Home.