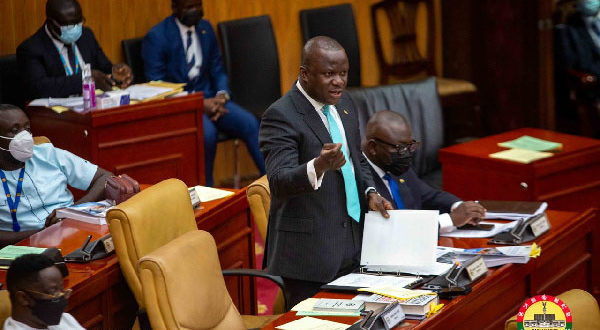 The Minister of Lands and Natural Resource and also Member of Parliament for the people of Damongo Constituency,  Samuel Abdulai Jinapor says President Nana Akufo-Addo’s comment on Akonta Mining Limited cannot absolve the company of any wrongdoing.

According to him, the comment will not also interfere with any investigation.

The Damongo MP added that his outfit is working with the Special Prosecutor on the matter.

The Minister’s remark was in response to a question posed if the President’s comments absolve Akonta Mining of any wrongdoing in the past.

On Wednesday, President Akufo-Addo speaking at the 8th National and 16th Biennial Congress of the National Union of Ghana Catholic Diocesan Priests Association, said, “Akonta Mining Company is not engaged in any illegal mining anywhere in Ghana as we speak.”

“It cannot, it cannot absolve them neither can it interfere with any investigations because I say the President was not speaking out of context, the President was speaking in response to an anxiety which has been expressed by the speaker at the conference.

“By any stretch of the imagination, it cannot and it will not and that is not the President spoke to,” he told the press after a meeting with the Chief of Defence Staff and the Military High Command on Thursday.

Mr Jinapor, however, stated that President Akufo-Addo’s comments were an assurance about the state of affairs.

The Lands Minister added that the President was not speaking to Akonta Mining as it happened in the past.

The Minister said the President must be rather be commended for his efforts in the fight against the canker.

Additionally, government has reviewed its strategy to fight illegal mining in the country.

“The country should feel assured that their President is putting in place measures to protect the country.”

Meanwhile, the convener of the Media Coalition Against Illegal Mining, says he is disappointed with President Akufo-Addo’s defence of Akonta Mining over its alleged involvement in illegal mining activities in the country.

Dr Kenneth Ashigbey said the comment by the President is worrying and could hinder ongoing investigations into the company’s operations.

According to him, state institutions mandated to supervise mining activities in the country have already confirmed the company’s involvement in the act – hence the President’s defence is untenable.