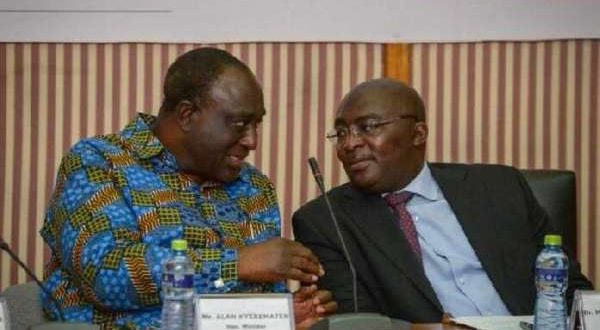 Nana Ohene Ntow, a former general secretary of the governing New Patriotic Party, has kicked against the proposal that the NPP present a Bawumia-Alan ticket in the 2024 general election.

Ohene Ntow, who is also a close confidant of Alan Kyerematen, the former minister of trade and industry, said he finds the proposed pairing problematic and that the party’s constitution must be allowed to work.

Responding on Asaase 99.5 Accra’s news analysis and current affairs show The Forum on Saturday (7 January 2023) to a question about whether the NPP should offer a ticket with both Kyerematen and Vice-President Bawumia, Ohene Ntow said: “My clear and direct answer will be an emphatic no!

“… NPP has always elected a presidential candidate, and once the candidate is elected, the candidate has the right and the privilege of choosing their running mate. So, why will you want to go and arrange something they are yet to arrive at?” he asked.

“So, in that arrangement, who becomes the candidate and who becomes the running mate? Do you want to predetermine that … That’s very problematic and we ought to allow the party’s constitutional and time-tested procedures to be allowed to follow the natural course.

“Let’s not jump the ship by coming out with this kind of arrangement, which I find to be very problematic,” Ohene Ntow added.

As Kyerematen, popularly known as “Alan Cash”, prepares to bid for the flagbearer slot for the governing party in the run-up to the 2024 presidential election, the pollster Ben Ephson said his resignation was long overdue.

Speaking on the Asaase Breakfast Show yesterday (Friday 6 January 2023), Ephson said: “It’s been too long in coming. We should expect a reshuffle in the coming weeks. By Tuesday or Wednesday it will be clear.”

However, appearing on The Forum, Ohene Ntow said the resignation was well timed, taking into account the party’s timetable and Ghana’s general political outlook.

“First of all, we’re talking about Alan Kyerematen, who we all agree is a very experienced politician,” the close confidant of the former trade minister told the host of The Forum, Kwaku Agyeman-Budu.

“We also know he has an ambition to lead our great party and the country. We are also looking at the timetable that is likely to be announced by the NPP.

“So, when I take all those into account, I think it’s a perfect timing,” the former broadcaster said.

“I wish you well” – Akufo-Addo to Alan

Kyerematen resigned on Thursday (5 January 2023) after meeting Akufo-Addo to inform him personally of his decision to leave office.

President Akufo-Addo thanked Kyerematen for his service to the government and the country and wished him well in his endeavours, a statement issued by the Office of the President said.

“The president has asked the Minister for Finance, Ken Ofori-Atta, to act as caretaker minister at the Ministry of Trade and Industry until a substantive appointment is made,” said the director of communications at the Office of the President, Eugene Arhin, in the statement issued yesterday.