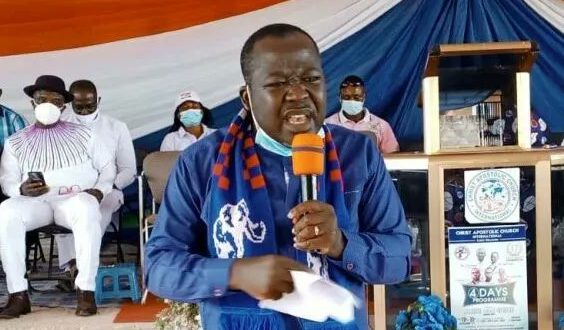 WN/R: NPP MP To Organise “Demo” Against The Municipal Assembly In His Constituency

The Member of Parliament for Bibiani-Anhwiaso Bekwai constituency in the Western North Region, Alfred Obeng-Boateng, has announced that he will be leading a demonstration in his constituency against the municipal assembly for its failure to carry out the core duty of ensuring the availability of basic social amenities.

The New Patriotic Party (NPP) legislator disclosed his planned demonstration when his addressed a press conference organised in his constituency on Saturday 7 January 2023.

The Bibiani-Anhwiaso Bekwai law-maker, Alfred Obeng-Boateng, in his address indicated that he is inviting all his constituents to clad themselves in red clothes and arm-bands for the demonstration on Monday 9 January 2023.

In explaining the rationale behind his call for a demonstration against the municipal assembly in his constituency, Mr Obeng-Boateng said he has had to personally construct about five public toilets in the constituency because they are a basic necessity in the municipality.

He laments that the work that should traditionally be that of the municipal assembly, has sadly become the responsibility of the sitting member of Parliament.

“I invite all of you to come out and join me. All you need is a red arm-band on one arm or both arms. If you have red clothes, wear it and if you don’t have one, wear any other colour.

“We want to have about 10,000 participants and we want them to know how frustrated we are. It is not for Alfred Obeng-Boateng’s interest, the whole community is suffering from the neglect of the municipal assembly and so we have to send them a strong message on how we feel about their actions and inactions” the Bibiani-Anhwiaso Bekwai law-maker, Alfred Obeng-Boateng said.

“If for two years, 2021 and 2022, since we came into office, we cannot point to a single project that the municipality has done for the community except those I have used my person finances to do, then we have a legitimate reason to demonstrate.

“If I do not have this constituency at heart, do you think I will invest these huge sums of money in it. Everyone who is 18 years and above is invited to join the demonstration, old ladies are invited” the NPP legislator added.

“We want to send a strong message to the Jubilee House so they get to know the reality on the ground and to draw their attention to the fact that certain person from the Bibiani-Anhwiaso Bekwai constituency who have access to them are deceiving them as far as the situation in the constituency is concerned” Alfred Obeng-Boateng said.

The Municipality was thus carved out of Sefwi-Wiaso District. The Municipal is one of the 261 Metropolitan, Municipal and District Assemblies (MMDAs) in Ghana and forms part of the 9 MMDAs in the Western North Region.

Bibiani, the administrative capital is 88km from Kumasi in the Ashanti Region and 356km from the regional capital, Sekondi. The total land area of the municipality is 832 square kilometers.

The Municipality is bounded on the north by the Atwima Mponua District in the Ashanti Region, south by the Amenfi West Municipal, west by the Sefwi Wiawso Municipal all in the Western North Region and east by the Upper Denkyira West District and Bekwai Municipal (formerly Amansie East District) in the Central and Ashanti Regions respectively.

The population of the Municipality according to 2021 population and housing census stands at 167,971 with 82,798 males and 85,173 females and the vision of the Assembly is to be an efficient and effective municipality with continuous enhancement of the living standards of its people.

The municipal assembly by way of its mission, exists to facilitate the overall development of the municipality by effectively formulating and implementing plans and programmes of the Assembly, Ministries, Departments, Agencies and Non-Governmental Organisations in order to improve the quality of lives of the people in the municipality.

I'm Adwenpa-Hene |Blogger & Broadcaster Journalist. I am the CEO and manager of this noble website. I publish on Entertainment, Sports, Politics, Lifestyle, and Technology. You can also follow Us on : YouTube Channel - My Ghana Media TV, Facebook - MyghanaMedia TV , Twitter - @MyGhanamedia2 & Instagram - My Ghana Media TV. Email Address: [email protected] Contact Us: 0200818719
@@MyGhanamedia2
Previous Zebilla MP Announces Exit From Parliament After 24 Years
Next Databank To Reopen Offices On January 10