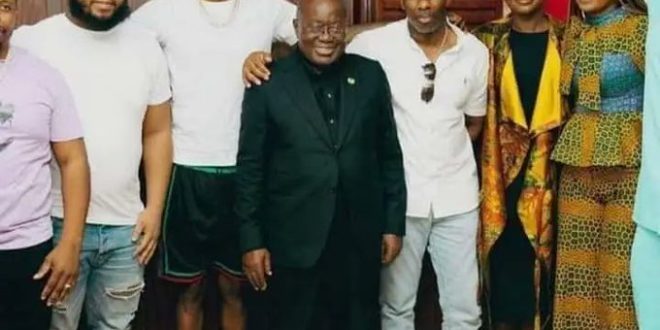 A leading figure of the New Patriotic Party has slammed critics of a video shot by US Rapper Meek Mill at the Jubilee House in Accra which has attracted public anger and criticism.

According to the government communicator, Mustapha Hameed, Ghanaians should appreciate Meek Mill for “projecting Ghana and the seat of governance to the whole world”.

Mr. Hameed berated opposition NDC whom he said did not see value in the Jubilee House and turned it into a Warehouse after they said it will be made a poultry farm.

The NPP figure said the hullabaloo about the video is a “storm in a tea cup” and making “mountain out of a molehill”.

“I have seed the seen the Meek Mill video. It’s actually beautiful, I love it. I thank him for projecting Ghana and the seat of governance to the whole world. Ghana is opened, more people need to come in and bring in their investments too.” The NPP big man wrote.

“I am here to also tell you, your anger is misplaced, nothing but waste of emotions. You’re only angry because people your follow seem angry lol. Storm in a tea cup, mountain out of a molehill.” He added.

“We thank God that Meek Mill saw value in the Jubilee House, took photos and some short clips and added them to his freestyle video for the whole world to see the magnificence of such a beautiful edifice. There are people in this country who don’t see any value in that building, turned it into a warehouse at some point, and have promised to turn it into a poultry farm. Bloody hypocrites! Confused lot.” He wrote.

The US Rapper Meek Mill last night released a music video featuring his visit to Ghana with a music video clip shot from the seat of government Jubilee House in Accra.

Ghanaians on social media expressed their outrage about the music video shot by US Rapper Meek Mill at the seat of Government, Jubilee House prompting the rapper to delete the video.

In a music video snippets of which has been shared online, Meek Mill is seen at various sections of thr Jubilee House with his “gang” shooting the music video.

Meek Mill is first seen at the frontage of the compound of the main Jubilee House Building rapping while the. Video moves to the inside of the seat of government.

Meek Mill and his entourage while appearing to be rapping were seen making their way into the Jubilee House tunnel towards the reception while still rapping in the video.

It is not yet clear whether the video was officially shot or it was an amateur mobile video shot into a clip and whether it had official permission.

The outrage online suggests many Ghanaians are not happy about the development.

I'm Adwenpa-Hene |Blogger & Broadcaster Journalist. I am the CEO and manager of this noble website. I publish on Entertainment, Sports, Politics, Lifestyle, and Technology. You can also follow Us on : YouTube Channel - My Ghana Media TV, Facebook - MyghanaMedia TV , Twitter - @MyGhanamedia2 & Instagram - My Ghana Media TV. Email Address: [email protected] Contact Us: 0200818719
@@MyGhanamedia2
Previous Meek Mill Confirms He Did Rap Video In The Jubilee House
Next Bibiani-Anhwiaso-Bekwai Youth Sends A Strong Message To President Akufo-Addo And NPP