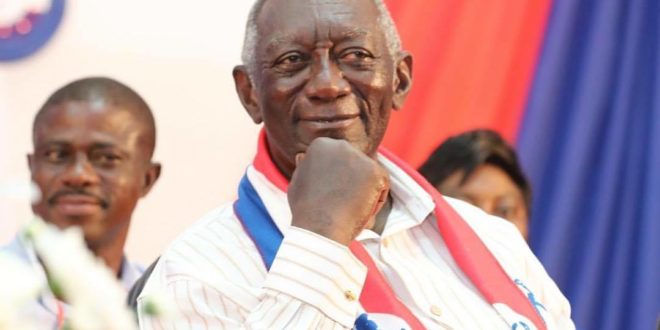 The Majority Leader and Minister of Parliamentary Affairs, Osei Kyei-Mensah-Bonsu  has divulged details of a conversation he had with former president John Agyekum Kufuor regarding the party’s flagbearership contest ahead of the 2024 elections.

The Suame MP is a proponent of the Bawumia-Alan ticket and has been seeking opinions from bigwigs of the party about his proposal.

Whereas his plan has received some endorsement from persons within the party, Osei Kyei-Mensah-Bonsu says John Agyekum Kufuour is against such an arrangement.

The Majority Leader told Kumasi-based Oyerepa TV that Kufuor shot down the proposal on grounds that it is against democratic principles.

In the view of Kufuor, the NPP has a history of providing fairgrounds for people to compete and therefore should not be scared of the challenge of Vice President Bawumia coming up against immediate-past Minister of Trade, Alan Kyerematen.

“President Kufuor has other ideas. He believes the party is a democratic party so we should allow the contest. I toned down because of what President Kufuor said. He probably was looking at it from a much broader perspective. He thinks the party has always been like this and that after the contest, unity will be restored so it should be kept like that. He wants us to leave them to contest,” he said in an interview published this week.

See also  You Are Not A Good 'Thief' - Devt. Consultant Tells Jean Mensa

Unlike Kufuor who is against the arrangement, his Chief of Staff, Kwadwo Mpiani is reportedly in favor of the move and has even proposed ways of determining which of the two men should be flagbearer and which one should be running mate.

Kyei-Mensah-Bonsu says that Mpiani recommended the recruitment of an independent body to conduct a survey on the popularity of both Alan Kyerematen and Mahamudu Bawumia.

“I went to see some elders in the party for that arrangement. I saw Kwadwo Mpiani and President Kufuor. Pianim believes it’s a good suggestion but who should contest as flagbearer and who should be running mate. He suggested that we engage an independent group to conduct a survey to determine which one becomes flagbearer and which one is running mate. I felt it was a profound statement,” he said.

See also  Carlos Ahenkorah: ‘E-levy Is Not Compulsory; If You Don’t Want To Pay, Don’t Do ‘MoMo’

Meanwhile Alan Kyerematen has announced his decision to contest the flagbearer race of the party, four days after he resigned from his role as Minister of Trade and Industry.

Alan Kyerematen in an address on Tuesday, January 10, 2023 announced his plans for the party and the country.

“His Excellency, Nana Addo Dankwa Akufo-Addo has been my good friend for a very long time and will always remain so. Based on our shared commitments, the ideals and principles that inspired the founding fathers of the NPP, we have competed in the past but have always worked together thereafter.

“The President has laid a strong foundation for the social-economic development of our country, although I believe there are things that could have been done differently,” the presidential hopeful stated.