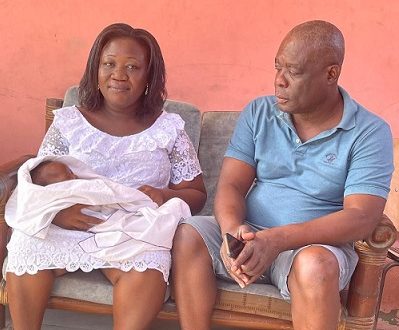 A Ghanaian couple who were expecting twins but were handed a single baby after delivery at the 37 Military Hospital say they are still traumatised four months after the incident.

The couple are accusing the staff of the hospital of allegedly being re­sponsible for the ‘disappearance’ of one of the freshly born babies supposed to be the other twin, delivered at the hospital.

The delivery was done through Caesarean section on Thursday 8 September 2022.
‘I don’t feel good’

“After the meeting, the officials asked me to see a psychologist, but it has not been helpful, because right now I am feeling the pain more, when I am watching TV and I see children, I lose myself,” she told the ABS host Kwaku Nhyira-Addo.

“The baby is four months old and I haven’t heard anything from the hospital. I don’t feel good about the whole situation and my husband is worried.”

Narrating the ordeal to the Ghanaian Times in Accra, the couple recalled that an ultrasonic checks done 31 weeks into the gestation period at two med­ical facilities, including the 37 Military Hospital, showed that Agyapong was carrying two live foetuses (twins). • A radiological report of the twin foetuses after 31 weeks

The Ghanaian Times’ painstak­ing investigations suggested that the first scan report, which was signed off by Dr Otu Danquah, was conducted on 22 April 2022, at the Cerica Diagnostic Services at Lartebiokoshie in Accra, when the pregnancy was 20 weeks.

Its results showed live intrauterine (inside the uterus) foetuses. Furthermore, a second ultra­sonic scan done at the 37 Military Hospital on July 21, 2022, and signed by Drs M.T Mpetey and R. Asiedu, a Resident and Senior Physician respectively, confirmed results of the earlier scan with twin A weighing 269g and B weighing 261g.

“In all, we did four different scans, all showing I was carrying live twins and it is baffling that one could disappear at birth,” Ms Agyapong told the Ghanaian Times.

Explaining further, she said on 7 September , 2022, when her ges­tation period was 38 weeks, she was admitted at the 37 Military Hospital where her vitals were taken with two foetal heart beats confirmed as normal.

“On the 8th of September 2022, the morning of the oper­ation, my babies were checked again and I was told they were both well. Double logistics were therefore taken for them. At the theatre, I was prepared for the operation and anaesthesia was given which completely numbed the lower part of my body.

“A screen was placed in the middle which prevented me from directly viewing what was happening. However, I felt the two babies being taken from my womb. Later, I heard a cry and one female baby was shown to me by a doctor named Dr Ali Saine, who told me ‘It is only one baby’.”

Dr Saine is a senior Obstetri­cian and Gynaecologist at the 37 Military Hospital, who performed the Caesarean section.
Sleepless nights

“I was startled and whilst try­ing to process the import of what I was just told, I heard the doctor tell his team members to take out their phones and video it. I was taken to the recovery ward where the doctor told me he would come and talk to me,” recalled Agyapong, who said she had been having sleepless nights since the incident.

According to the disturbed mother, to make matters worse, she was later told that what she thought was a second baby, was rather a placenta.

“I was shocked because this was not the first time I was giving birth and I know how one feels when the placenta comes out.”

For his part, Naawu, a senior driver at J.A Plant Pool Ghana Limited in Accra, said his baby’s alleged disappearance was “unacceptable” as he was asked to pay for double items before the operation.

“I have twins from my previ­ous marriage and was glad I was going to have another set only to be told this shocking story,” the evidently upset father fumed.

He continued: “As I speak now, I have not been able to outdoor the child, nor give her a name, because I do not know whether the missing baby is also female or male.”

Meanwhile, on 10 October, 2022, Naawu petitioned the Commander-in-Charge of the 37 Military Hospital to cause an investigation into the matter and bring back his missing child.

Several attempts made by the Ghanaian Times to speak to Dr Ali Saine on the issue, proved futile, as he insisted on contacting the Commander-in-Charge of the 37 Military Hospital, for permission.

“We have a laid-down pro­cedure here. I can’t speak to the media unless you seek permission from the appropriate quarters at the hospital,” he insisted.

After a couple of attempts to speak to him fell through, the Ghanaian Times on 14 October, 2022, officially wrote to the Commander-in-Charge of the 37 Military Hospital, requesting an interview with Dr Saine.

Several follow-ups have been made ever since, but to no avail; as it was always met with the re­frain at the hospital’s administra­tion that: “we are working on it.”

On Friday, 28 October, 2022, the Ghanaian Times wrote another letter addressed to the Public Af­fairs Department of the 37 Mil­itary Hospital, requesting for an interview with Dr Ali Saine, but only received a verbal response assuring that an investigation has been commenced into the case.

However, an eye specialist at the 37 Military Hospital, Wing Commander Isaac Bediako Ford­juor who is part of a team tasked to probe into the matter, told the Ghanaian Times in November last year that investigations had commenced.

“We have interviewed all concerned including nurses who worked at the theatre on that fate­ful day and we shall brief you on our findings when we are done,” he said.

Nearly four months have passed since investigations com­menced into the incident.

Listen to Audrey Agyapong in the attached audio clip below:

I'm Adwenpa-Hene |Blogger & Broadcaster Journalist. I am the CEO and manager of this noble website. I publish on Entertainment, Sports, Politics, Lifestyle, and Technology. You can also follow Us on : YouTube Channel - My Ghana Media TV, Facebook - MyghanaMedia TV , Twitter - @MyGhanamedia2 & Instagram - My Ghana Media TV. Email Address: [email protected] Contact Us: 0200818719
@@MyGhanamedia2
Previous Gambia’s Vice President Dies In India
Next Assembly Members In Sunyani Municipality Have Hailed The Marvelous Performance Of Their MCE, MP For Initiating Developmental Projects In The Area.