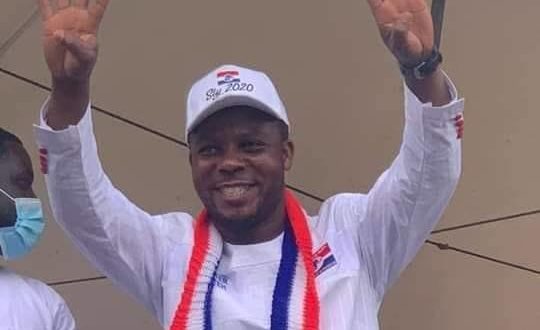 MP For Bortianor-Ngleshie-Amanfro Declares His Support For Alan Kyerematen

The Member of Parliament for Bortianor-Ngleshie-Amanfro, Mr. Sylvester Matthew Tetteh is the latest politician to publicly declare his support for former Trade Minister, Alan John Kwadwo Kyerematen in the latter’s quest to seek the flagbearership position of the New Patriotic Party (NPP).

According to Sylvester Tetteh, the former Minister is a hardworking person who needs to take his turn as leader of the party to enable it ‘Break the Eight’.

“No one will inform you that it is now Alan’s turn, if you are a member of the NPP, want to enjoy the party, and are aware of its rules and policies. I am willing to assist Chief Alan in his grassroots efforts to break the eight.”

Touching on Mr. Kyerematen’s accomplishments, Sylvester Tetteh stated that he was instrumental in the success of the party’s flagship programmes, One District, One Factory.

“A record 67 business resource centers have been established around the nation, with 37 of them being staffed and fully functioning, and the remaining 30 having been finished but not yet put into use, thanks to the inspirational leadership of Alan Cash, the outgoing Trade and Industry Minister, “Sylvester Tetteh said on Accra-based Original 91.9 FM.

These, he believes are exceptional qualities needed to lead the country.

However, no political party has served more than two terms in office since the establishment of the Fourth Republic.

Nonetheless, the ruling party is determined to be the first to achieve such a goal, hence the slogan ‘Breaking the Eight’.