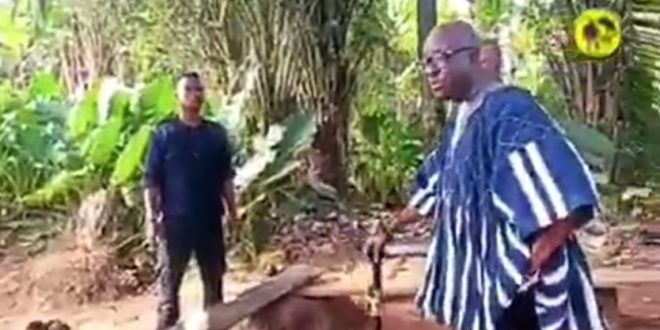 A police officer, Francis Adetsi from ofoase in the Eastern region stationed at Ayirebi has been caught smoking weed at Akim Etwereso in Akyemansa District.

He was caught red-handed by Daasebre Ofosu Kwabi Ayebiahwe, Etweresohene and his entourage who were touring the community.

Daasebre Ayebiahwee and his entourage saw a boy emerging from the bush having engaged in open defecation.

The Chief asked the boy to lead them to where he defecated presumably to get evidence to punish him but on their way to the bush, the police officer in uniform and others were seen at a ghetto in the bush smoking weed with smoke all over the place.

The Chief rebuked the wee smokers in a video taken as evidence.

It is not clear if the police officer and other suspects were arrested and handed over to police.

The video of the said incident has since been posted on the Facebook wall of Daasebre Ayebiahwee.

With the characteristics of the current IGP Dr.George Akufo Dampare, the police officer is likely to be interdicted.

Watch the video below to know more…

See also  Police Officer Sets Himself Ablaze At His Home