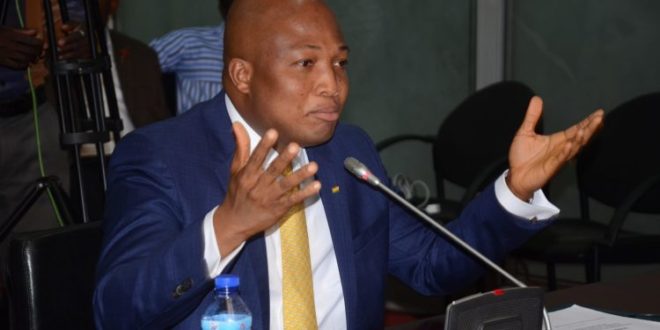 The Member of Parliament for North Tongu, Samuel Okudzeto Ablakwa, has made more explosive allegations against Rev. Victor Kusi Boateng, the Secretary to the Board of Trustees of the National Cathedral.

In his latest epistle, the lawmaker said Rev. Kusi Boateng does not only operate under multiple identities but also under different biological mothers.

In a lengthy post on his Twitter and Facebook page on Friday, January 20, the lawmaker who has made several allegations of conflict of interest against the preacher said Rev. Kusi Boateng has used different names of women as his biological mother to secure different Tax Identification Numbers and has used same to register multiple businesses.

“Interestingly, he has made no attempt over the years to correct or amend the records. On the contrary, he appears to be benefiting from this grand well-orchestrated conspiracy as he proceeds to engage in numerous business transactions with both names.”

As I revealed on Metro TV’s Good Morning Ghana programme a while ago; when Paul Adom Otchere claimed on his show last night that Rev. Victor Kusi Boateng AKA Kwabena Adu Gyamfi was advised to use his mother’s name following the demise of his father; what Paul didn’t want Ghanaians to discover is the fact that in addition to the double dates of birth and double TINs; Rev. Kusi Boateng also mystifyingly claims to have two biological mothers.

On the 13th of August, 2013 when he filled his Taxpayer Registration Form at the GRA under the name Victor Kusi Boateng with a date of birth of September 7, 1971; he declared that his mother’s maiden last name is Ataah, and her first name is Agnes.

He was subsequently given a Taxpayer Identification Number for his Victor Kusi Boateng name as P0002502682.

Curiously, on the 24th of March, 2016 he returned to the GRA, this time with the name Kwabena Adu Gyamfi and a date of birth of December 30, 1969. He strangely declared a different biological mother with a maiden last name of Gyamfua and a first name of Yaa.

This is how he secured another TIN — P000627241X.
Interestingly, he declared on the forms that he is not a registered taxpayer even though he was and already had a TIN.

Interestingly, he has made no attempt over the years to correct or amend the records. On the contrary, he appears to be benefiting from this grand well-orchestrated conspiracy as he proceeds to engage in numerous business transactions with both names.

It is this same scheme that allows him to be appointed unto the National Cathedral Board of Trustees as Rev. Victor Kusi Boateng which was incorporated on 18th July, 2019, and yet be granted a Diplomatic Passport with Passport Number DX006845 under the name Kwabena Adu Gyamfi — a passport issued on 25th November 2021 which expires on 24th November 2026.

Clearly, both names are exceedingly active and very much so within the same period. A very conscious and sophisticated machination to maintain a dual personality in ways that may just rival the biblical doctrine of the Trinity.

I shall return with more. For God and Country.
Ghana First. 🇬🇭