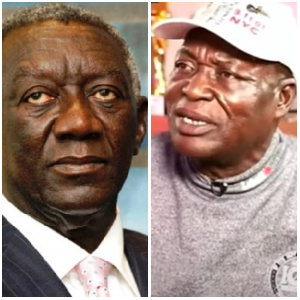 A former Ghanaian soldier who worked closely with Ghana’s oldest-living former president, John Agyekum Kufuor, has narrated what he said was a moment when the elderly statesman cried in front of him because he refused to return to Ghana.

According to the 75-year-old man, Michael Molley, who is better known as Gago or Rambo, President John Kufuor had come to meet him in New York, begging that he return to Ghana with him.

Rambo told Kofi Adoma of Kofi TV, in an interview monitored by GhanaWeb, that the former president did so because he had intel that should he return to Ghana, he could be dead in a week.

He added that John Kufuor convinced him to return, although he had made it clear to him that he wanted to stay back to retire so that he does not lose his pensions.

He also stated that he (Rambo) had earlier foiled two attempts by some military officers to overthrow President Kufuor.

“I was in America for 22 years. Kufuor has destroyed my life. I worked for so long in America so much that when I was returning to Ghana, my company didn’t want me to because they said it would collapse if I left. But I told them my country’s president had requested my presence, so I had to go.

“All the things President Kufuor promised me, as I speak now, not even a dollar or a cedi has been given to me. I have zero. I am really suffering… he wanted me back because he was facing a lot of coups issues at the time. So, personally, the visions I used to get, I called him and told him about the people who were intending to overthrow him. They were a military general and a military major. The general is late today, but I was able to stop him twice, even though he was, at the time, the best military officer. I proved to him that I was better.

“You have failed to fulfill all the promises you made to me. All what I have done, you have been giving awards to other people, you have never given me one. You never give me a car, I have been trekking up and down to countries working… you cried in New York when I told you I was not coming to Ghana because I still had 5 more years to go on retirement and returning to Ghana would mean that I would lose my pensions.

“But he said that if I don’t go with him to Ghana and he returns alone, in a week’s time, I would hear that he was dead,” he narrated.

After trying hard to avoid crying on TV, Rambo explained that he is currently suffering so much that he blames all of it on the former president.

“So, Mr President Kufuor, are you happy that I’m suffering?” he asked in the interview monitored by GhanaWeb.

Watch the full interview as he narrates his stories in the video below: