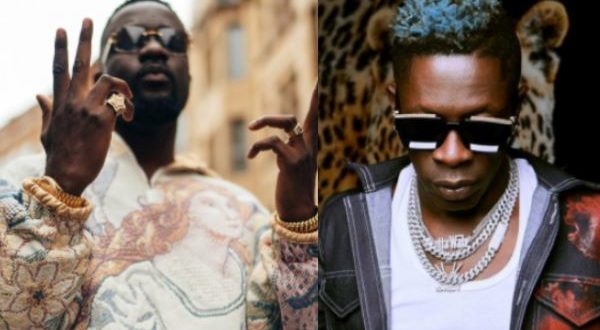 A Ghanaian rapper,  Michael Owusu Addo known professionally as Sarkodi has finally responds to Shatta Wale, who described the rapper’s feature on Bob Marley’s new version of Stir It Up as ‘featuring a ghost’. Despite most saying Shatta Wale’s comment is unfortunate, Sarkodie says he has taken it as a compliment.

One of Ghana’s biggest musical highlights has been spearheaded by Sarkodie bagging a feature on the legendary Bob Marley and the Wailer remake song. Many industry stakeholders, musically inclined people and the general public have shared their sentiments, including Shatta Wale, who described it as “featuring a ghost” during an interview.

Sarkodie responded to a fan who asked how he felt about Shatta Wale’s comment during a Twitter Space session: “That’s not bad. That’s a compliment.”

Bob Marley & The Wailers, Sarkodie – Stir It Up ft. Sarkodie https://t.co/6cOcMc7am0 via @YouTube

Continuing to talk about this historic moment in Ghana’s music history, Sarkodie cautioned his fan base to not lose focus of his achievement. He acknowledged their support in his career and asked them to go above the Sarknative umbrella to appreciate what the feature means for every musician and Ghanaian.

Bob Marley and the Wailer featuring Sarkodie – Stir It Up– was released on January 20, 2023. Currently, it is the number 1 trending music video on Youtube.

Sarkodie came through with rap verser in English and Twi, a local dialect of the Akan ethnic tribe in Ghana, West Africa, where Sarkodie is an indigene.

I'm Adwenpa-Hene |Blogger & Broadcaster Journalist. I am the CEO and manager of this noble website. I publish on Entertainment, Sports, Politics, Lifestyle, and Technology. You can also follow Us on : YouTube Channel - My Ghana Media TV, Facebook - MyghanaMedia TV , Twitter - @MyGhanamedia2 & Instagram - My Ghana Media TV. Email Address: [email protected] Contact Us: 0200818719
@@MyGhanamedia2
Previous Kufuor Cried And Begged When I Refused To Return To Ghana To Save Him From Coups – Rambo
Next Former GFA Boss Alhaji MND Jawula Is Dead