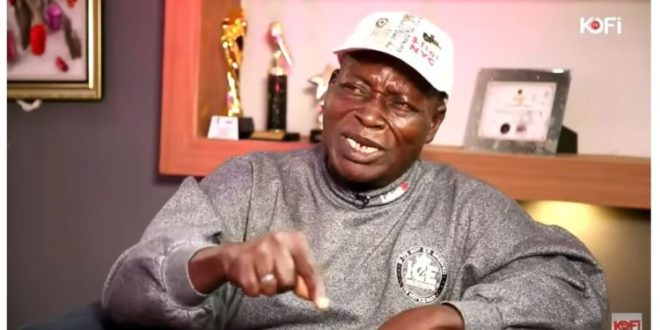 Rambo: I Made Alan Kyeramaten Lose The Flagbearer Election Against Akufo-Addo

75-year-old Michael Molley, also known as Gago or Rambo, who was with the 5th Battalion of Infantry of the Ghana Army, has spoken up after so many years of silence.

The former military man was noted for uncovering many attempts at toppling the Dr Hilla Limann administration, as well as the John Agyekum Kufuor administration.

Speaking in a recent interview with Kofi Adoma on Kofi TV, monitored by GhanaWeb, Rambo disclosed that he was the one behind Alan Kyerematen’s defeat to Nana Addo Dankwa Akufo-Addo in 2006.

According to him, a mallam had come to him to help his candidate, Alan Cash, win the flagbearer elections, but he chose Akufo-Addo to lead the party.

“I saved the late Acheampong, late J.J Rawlings, former president Kufuor. I was working for the NPP and they didn’t want me to work for the NDC. Nana Akufo-Addo was my friend in the 70s. When Nana and Alan Cash were vying for flagbearership, I was the one who made Alan Cash lose that elections. I was the one who made him lose. The evidence is there. The person who came to me to help him was a mallam. The mallam said he didn’t like Nana Addo, he wanted Alan to be the flagbearer,” he explained.

His refusal, he told the host, was because Alan Kyerematen was too young to be president.

“I refused, I told him Alan was too young, and he was not too smart in politics. I told the mallam that I didn’t have any special powers but whenever I speak, it came with finality… Just recently, he came to me to help Alan, but I refused,” he said.

However, he reiterated that despite all his efforts and hard work for the party, they have now abandoned him; adding that until they come to his aid, they (NPP) will never break the eight.

Breaking down and trying to control himself from shedding tears on camera, Gago added that he is really suffering and can go an entire week without getting food to eat.

“I have to take porridge on credit. I was in America for 22 years. Kufuor has destroyed my life. I was working in America, my company didn’t want even let me leave. I told them I had an unfinished business to do in Ghana, the sitting president was waiting for me,” he added.

“All the promises made by President Kufuor was not fulfilled. I am really suffering. He was scared of impending coup threats, that was why he called for me. I stopped that from happening. There 2 people: one is late and the other, a major, is even a chief, who was the best military officer then… They wanted to overthrow Kufuor and also kill over 3000 list of people at Nicholsen Stadium. If I had not done that, Ghana would have collapsed. That supposed coup would have surpassed all overthrows in Ghana’s history.

“So Mr President Kufuor, are you happy that I’m suffering?” he asked in the interview monitored by GhanaWeb.

I'm Adwenpa-Hene |Blogger & Broadcaster Journalist. I am the CEO and manager of this noble website. I publish on Entertainment, Sports, Politics, Lifestyle, and Technology. You can also follow Us on : YouTube Channel - My Ghana Media TV, Facebook - MyghanaMedia TV , Twitter - @MyGhanamedia2 & Instagram - My Ghana Media TV. Email Address: [email protected] Contact Us: 0200818719
@@MyGhanamedia2
Previous Former GFA Boss Alhaji MND Jawula Is Dead
Next Daddy Lumba Will Soon Hear From Me; Our Beef Will Be The Greatest This Year – Great Ampong