Breaking News
Home / ENTERTAINMENT / Daddy Lumba Will Soon Hear From Me; Our Beef Will Be The Greatest This Year – Great Ampong 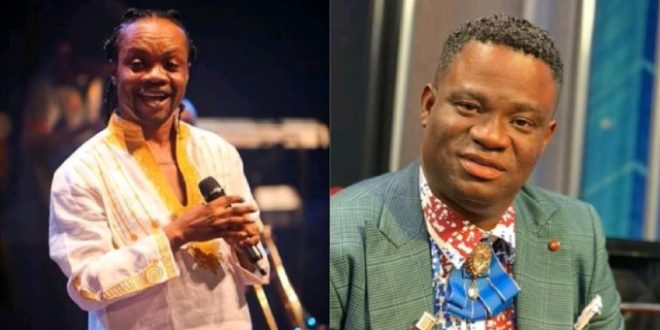 Daddy Lumba Will Soon Hear From Me; Our Beef Will Be The Greatest This Year – Great Ampong

It appears that two Ghanaian musicians, Daddy Lumba and Isaiah Kwadwo Ampong, have reignited their feud on social media.

In 2016, Isaiah Kwadwo Ampong and Daddy Lumba had a rift over some GH¢340,000.00 proceeds from an album launch that the latter allegedly pocketed.

One can recall that the two musicians, (Daddy Lumba and Kwadwo Ampong) formed a group called ‘Kojo Kojo’ to release a hit single, “Hossana,” in 2015.

Ampong said, he and Daddy Lumba agreed to share the money accrued from the launch of that particular song but that never happened.

The Bandex Music CEO said Daddy Lumba bolted with the money and he never had his share to date.

This has since created enmity between the musicians as 7 years down the lane, Ampong still feels bitter about the development.

Daddy Lumba who is also keeping malice with Ampong has since never reached out to him to make amends.

Recently, Daddy Lumba released a diss track titled ‘Ofon nae di asem fo’ which was accompanied by a stern warning to a detractor.

“That useless individual, I am not done dealing with him,” Daddy Lumba said while unveiling the song on DL FM.

Analyzing the contents of the song, netizens concluded that it is targeted at Ampong.

However, Isaiah Ampong, who has confirmed that the diss song was directed at him has also threatened to take action.

Touching on the said song, Ampong said someone from Lumba’s camp, gave him a hint about it in 2018.

Ampong who claims that the battle line has been drawn said he is done ‘cooking’ his diss song and will release it very soon.

“Sometime in 2018, a young man came to me and told me that his boss is recording a diss song for me. He told me that it won’t be long, I’ll hear of it. He said Daddy Lumba was recording a diss song for me and Roland (Roro), my music producer. So I had the hint already and I was looking forward to the diss song and now it’s here. He will hear from me very soon. He will definitely hear from me. This is going to be the beef of the year.

“My mother told me to stop and you can recall that since then, I haven’t even uttered a word. But as he has released a diss song, the battle line has been drawn. After stealing from someone, the thief is angry even when the victim is not. I’m done with the diss song because I don’t suffer to write songs. I am not a coward, I have been through a lot so I am much bolder.”

I'm Adwenpa-Hene |Blogger & Broadcaster Journalist. I am the CEO and manager of this noble website. I publish on Entertainment, Sports, Politics, Lifestyle, and Technology. You can also follow Us on : YouTube Channel - My Ghana Media TV, Facebook - MyghanaMedia TV , Twitter - @MyGhanamedia2 & Instagram - My Ghana Media TV. Email Address: [email protected] Contact Us: 0200818719
@@MyGhanamedia2
Previous Rambo: I Made Alan Kyeramaten Lose The Flagbearer Election Against Akufo-Addo
Next ‘Amend Constitution And Make All Positions In NPP Elective’ – P.K. Sarpong Writes