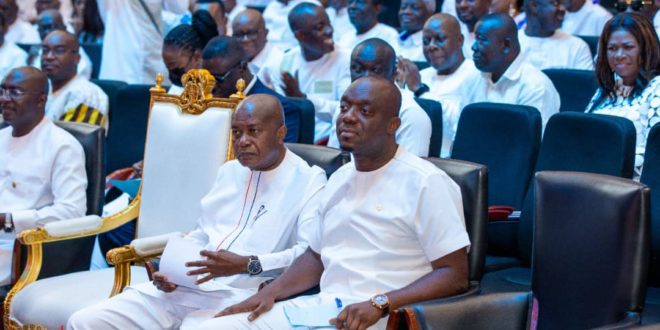 Ahead of the election of the presidential aspirant for the New Patriotic Party (NPP) for the 2024 polls, Mr. Owusu Afriyie has cautioned members of the National Executive Council (N.E.C.)  against breaching party protocols.

A leading member of the New Patriotic Party in the United States, Mr. Owusu Afriyie  called for peace, unity and strength for the party as they head to their primaries and subsequently 2024 general elections.

Speaking in an interview with newsmen, he indicated that the New Patriotic Party is a democratic party which was formed under a constitution, integrity, rules and regulations to steer the affairs of the party hence the need for the party executives to execute these rules and regulations within the party to facilitate peace and harmony as the party approaches its primaries.

He explained that the numerous calls between some executives of the party on Dr. Bawumia and Alan Kyeremanteng about who becomes the next president are not democratically right and frown against the rules and regulations of the party hence those calls must be put to an end as soon as possible and hand over the fate of whoever becomes the flagbearer of the party to delegates to decide when the period of the primaries is due explaining that the party needs a unifier who can lead the country to success and has deep knowledge in politics to win the presidential seat for the party in 2024 elections.

Mr. Owusu Afriyie added that there is a massive task ahead of the NPP hence the party needs a competent leader who can lead the party to the battlefield and defeat the opposing party and so Bawumia is not the candidate the party must entrust their power to because he doesn’t have any political experience with no palatable campaign messages to overcome that of the NDC and John Dramani Mahama who has been a president before.

Therefore, people thumping Dr. Bawumia to be the flag bearer must rethink their decision because Bawumia as flag bearer will cause the party to lose massively in the Ashanti region in the 2024 general elections which will subsequently affect the chances of the NPP breaking the 8. After all, the party is poised to win the 2024 election to meet their breaking the 8 targets.

He implores the party’s National executives to call the Ashanti Regional Chairman, Mr. Bernard Antwi Boasiako (Wontumi) to order and if possible suspend him because he is part of the few people who are going against the rules and regulations of the party by fueling the Alan and Bawumia ticket which may cause chaos in the party’s coming primaries.

He finally pleaded with the NPP members of Parliament to as a matter of urgency solve the problems in parliament surrounding the Finance Minister and a section of the NPP parliamentarians who agreed to cast a vote of censure against him as a result of his poor performance on the economy.

He said NPP needs unity, Peace and cohesion to overcome the 2024 battle against the NDC therefore picking up their broken pieces now will strengthen the party to face the 2024 general elections with full energy and capabilities.