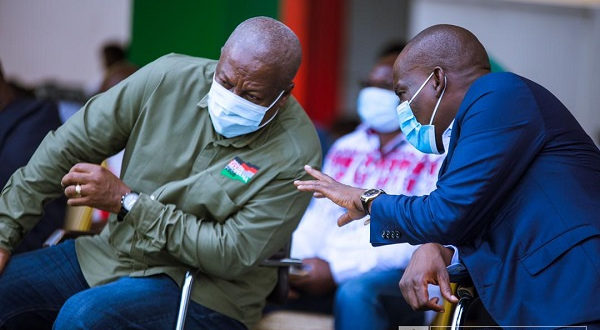 Charles Nii Teiko Tagoe, an executive assistant and head of social media at the Office of the President, has alleged that the replacement of the Member of Parliament (MP) for Tamale South, Haruna Iddrisu, as Minority Leader, was orchestrated by ex-President John Dramani Mahama.

In a tweet shared on Friday, January 24, 2023, Teiko Tagoe also alleged that the removal of Haruna Iddrisu had the support of the General Secretary of the National Democratic Congress (NDC), Johnson Asiedu Nketiah.

The NDC appointed the former deputy Minister of Finance, Dr. Cassiel Ato Forson, as the minority leader in the 8th Parliament.

The new changes were contained in a letter to the Speaker of Parliament, Alban Bagbin, from the National Democratic Congress. The letter was signed by NDC General Secretary Fifi Fiavi Kwetey.

I'm Adwenpa-Hene |Blogger & Broadcaster Journalist. I am the CEO and manager of this noble website. I publish on Entertainment, Sports, Politics, Lifestyle, and Technology. You can also follow Us on : YouTube Channel - My Ghana Media TV, Facebook - MyghanaMedia TV , Twitter - @MyGhanamedia2 & Instagram - My Ghana Media TV. Email Address: [email protected] Contact Us: 0200818719
@@MyGhanamedia2
Previous Govt Committed To Protecting Human Rights Of LGBTQ+ Groups In Ghana – Attorney General
Next Bawumia Can Be A Good President if….. – Former NPP MP