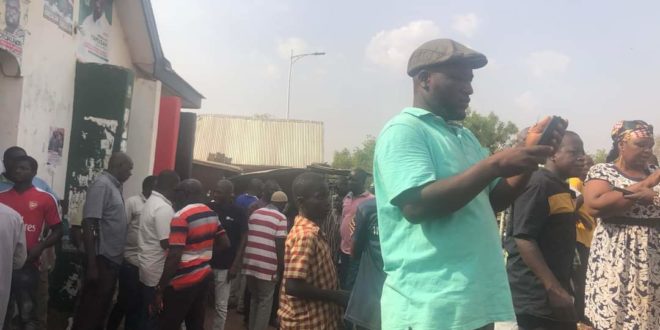 Supporters of the largest opposition National Democratic Congress (NDC) of the Tamale South constituency in the Northern Region, have given the leadership of the party a three days ultimatum to reinstate the lawyer Haruna Iddrisu as Minority leader in Parliament or face their wrath.

The supporters who felt surprise about the leadership changes by the NDC in Parliament say, “the NDC should forget about the 2024 general elections if they fail to reinstate our MP as Minority Leader in Parliament”, they warned.

“This is not right. Why are they doing this to him? We wanted to even burn down this office if not the timely intervention of the security”, they added.

Their warning comes after the party on Tuesday, January 24, made some changes to its leadership in parliament with the Ranking Member of the Finance Committee and Member of Parliament for Ajumako-Enyan-Esiam Constituency in the Central Region Dr. Cassiel Ato Forson, replacing the Tamale South MP Haruna Iddrisu as the Minority Leader.

Ahmed Ibrahim and Comfort Doyoe-Ghansah have however maintained their positions as First and Second Deputy Whips respectively.

Meanwhile, some NDC legislators who are unhappy with the situation are already describing the development as a “coup d’etat”.

I'm Adwenpa-Hene |Blogger & Broadcaster Journalist. I am the CEO and manager of this noble website. I publish on Entertainment, Sports, Politics, Lifestyle, and Technology. You can also follow Us on : YouTube Channel - My Ghana Media TV, Facebook - MyghanaMedia TV , Twitter - @MyGhanamedia2 & Instagram - My Ghana Media TV. Email Address: [email protected] Contact Us: 0200818719
@@MyGhanamedia2
Previous Fiifi Kwetey Rubbishes Claims Of No Consultation Over Shake-up In Minority leadership
Next Backbenchers Anger, 2024 Elections: The Confirmed And Reported Reasons Behind NDC’s Parliamentary ‘coup’