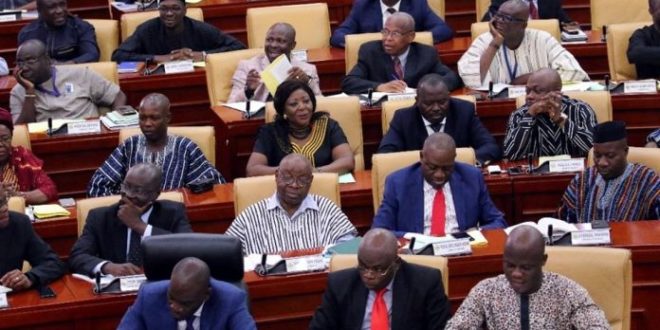 Information available indicates that,  at  least  60 Members from the Minority caucus in Parliament have signed a petition to the National Executive Council of the National Democratic Congress (NDC) to rescind a reshuffle they effected at their leadership front Tuesday.

The petition which started with 11 Core MPs from three regions signing this morning grew to 25,  and  before recent update indicates 60 MPs out of 137 have so far signed.

The group says the changes the party leaders announced January 24 is unpopular and would not auger well for the umbrella family.

The NDC has named Dr. Cassiel Ato Forson as the new leader of the Minority. But ahead of a crucial Minority caucus meeting on Thursday, the party is racing against time to achieve party unity in Parliament.

“We the undersigned NDC Members of Parliament have taken note of a letter signed by our party General Secretary Fifi Kwetey, dated 23/01/23 and addressed to the Speaker of Parliament. The letter purportedly makes changes to the leadership of our caucus. With all due respect to the leadership of our party at all levels, we wish to request that they patiently broaden and deepen consultations on the subject again, because we have doubts about how thorough the process was”, part of the decision reads.

It continues that “we are concerned that this critical decision didn’t seem to have taken into consideration the unity of purpose and focus our caucus requires to deal with; the Electoral Commission’s intentions to introduce a new CI, the government’s IMF negotiations and its intended reintroduction of the ‘Agyapa deal’ before the House. We also think this decision would have unintended consequences as we go into our Parliamentary primaries.”

These 60 MPs are threatening not to recognize Dr. Cassiel Ato Forson as Minority Leader.

“Until then, without disregarding with the content of the letter signed by the General Secretary of our party and without malice towards our colleagues proposed as new leaders, we the undersigned NDC members of Parliament resolve to stand by our current leadership, until the process of consultation is satisfactory to all concerned.”

See also  NAGRAT Distances Itself From All Teachers Alliance Over One Teacher, One Laptop Deductions

Meanwhile, another group of MPs, numbering more than 40 have also signed a counter petition endorsing Dr. Ato Forson as the new Minority Leader.

According to the party, the current issues confronting the nation is more economical and therefore needs someone that possesses that prowess to battle the government better in the House to establish fertile grounds for the NDC to regain power in 2024.

Moreso, Deputy Minority leader, James Klutse Avedzi’s position has been taken for Emmanuel Kofi Armah Buah for what the leadership says is his expertise in the energy sector.

Gordons Kwame Agbodza also took over from Mohammed Mubarak Muntaka as Whip for the Minority.

General Secretary Franklin Fifi Fiavi Kwetey has also held the shakeup is part of the party’s repositioning strategy to win power in 2024.