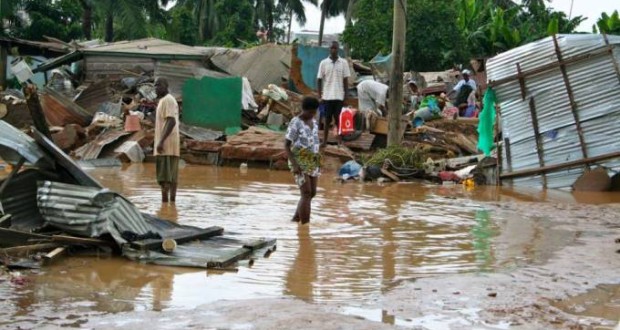 Five deaths have been recorded over the weekend in four districts of the Eastern Region after the recent floods.

He explained 10 more persons have been declared missing in the Nsawam Adoagyiri Municipality.

A total of 17 Municipal and District Assemblies have been affected by the floods.

She pointed out several house owners have already been prosecuted at the court.

“We will take action. You have no idea the number of people were are prosecuting at the court for building on waterways”

The Akwadum bridge over the Densu River was worse affected. The Regional Highway Director Ing. Patrick Okoto, explains, solution to the matter lies within all the allied agencies.

“Everytime it rains, the places get flooded, all of us have work to do to resolve it,” he urged.

The NADMO Regional boss, Kwame Appiah Kodua, says assessment of the devastation effect of the floods across the region have not ended yet.

“17 MMDAs have been affected across the Eastern Region as a result of the floods from Friday September 30 to Monday October 3 2022. Five deaths have been recorded in four of the districts whiles 10 persons have been declared missing,” he said.

The zongo community was worst affected, including areas such as Gyankrom, Lanteh, Adoagyiri and the main Nsawam lorry station.

Addressing the media, the MP for Nsawam-Adoagyiri, Frank Annoh-Dompreh, said: “We will all continue to monitor the situation and see what we can do. We appeal for calm.”

I'm Adwenpa-Hene |Blogger & Broadcaster Journalist. I am the CEO and manager of this noble website. I publish on Entertainment, Sports, Politics, Lifestyle, and Technology. You can also follow Us on : YouTube Channel - My Ghana Media TV, Facebook - MyghanaMedia TV , Twitter - @MyGhanamedia2 & Instagram - My Ghana Media TV. Email Address: [email protected] Contact Us: 0200818719
@@MyGhanamedia2
Previous Razak Kojo Opoku Writes : NDC Has Been To IMF 10 Times & NPP Has Been To IMF Only Twice
Next Nkwanta South: Thunder Strikes 12-year-old Boy