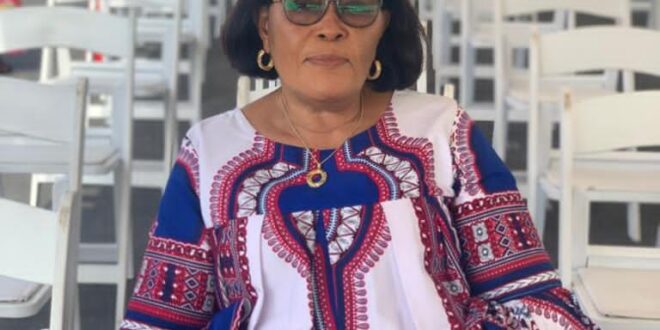 Some of the New Patriotic Party Executives in the Ablekuma Central Municipality  want President Nana Akufo-Addo to dismiss their  Municipal  Chief Executive, Hon. Mariama Karley Amui.  According to the constituency executives, the President should sack the MCE with immediate effect or else face their wrath. They therefore  asked President Nana Akufo-Addo to appoint Mr Frank Akwasi Debrah as their new Municipal Chief Executive (MCE).

“We are very angry to issue this important statement. The executive committees of the above mentioned constituencies are calling on the President, His Exellency Nana Addo Dankwa Akufo Addo to dismiss the Ablekuma Central Metropolitan Chief Executive Officer (MCE),  Hon. Mariama Karley Amui  with immediate effect on the basis of the understated reasons”, Isaac Anokye said.

At the Press conference the angry constituency outline some of their displeasure about the MCE and why it is important for the President to sack him with immediate effect. Mr Isaac Anokye  stated that the MCE is running a parallel administration and takes decisions without consulting the constituency executives on the matter.

They also outline that the outright disrespect from the MCE toward them has gone on for far too long and they can no longer tolerate him in the metropolis.

In addition, they have accused the MCE of undermining the Political authority in the region. Therefore is has become necessary for them to beseech the first gentleman of the land to immediately sack the MCE.

Read the Full Statement Below:

HIS EXCELLENCY NANA ADDO DANKWA AKUFO-ADDO
THE PRESIDENT OF THE REPUBLIC OF GHANA AND
THE COMMANDER-IN-CHIEF OF THE GHANA ARMED FORCES
C/O THE CHIEF OF STAFF
OFFICE OF THE PRESIDENT
JUBILEE HOUSE, ACCRA

Your Excellency Mr. President, we wish to extend our congratulations to you
on your reelection and successful swearing-in into office for a second term
as the President of the Republic of Ghana. We pray to God to grant you
wisdom and strength to continue to deliver on your mandate as the
President of the Republic and the Commander-in-Chief of the Ghana
Armed Forces (GAF) of this great nation. We trust and have no doubt in our
minds that you will deliver on your mandate, thus we wish you all the very
best.

To begin with Your Excellency, permit me to introduce ourselves to you as

disgruntled Constituency Executives, Electoral Area Coordinators, Polling Station Executives, Party Supporters and ordinary residents of the Ablekuma
Central Municipal Assembly.
Prior to the 2016 General elections, then parliamentary candidate on the
ticket of our great elephant party the New Patriotic Party, Hon. Ebenezer Nii
Narh Nartey made a promise to the good people of the constituency to
make sure the then Ablekuma Central Submetro is raised to the status of a
Municipal Assembly if he gets the nod to represent the people of Ablekuma
Central Constituency. In fulfilment of this promise and with the help of the
Director of Operation at the Presidency, Hon. Lord Oblitey Commey, your
Excellency honoured us with the Municipal status now known as the
Ablekuma Central Municipal Assembly.
This brought joy to all party faithfuls and residents with the expectation that
there will be job opportunities, scholarship opportunities, developmental
projects as well as all others that come with the municipal status.
Unfortunately, this blessing has never lived up to expectation of all since the
appointment of Hon. Mariama Karley Amui as the Municipal Chief
Executive which reflected in the just ended 2020 General Elections where
your good self and the then incumbent Member of Parliament lost
massively.

See also  After Benefitting, You Want Us To Dialogue – NDC’s Akamba To Akufo-Addo On Galamsey Forum

OUR CONCERNS AGAINST THE RENOMINATION BID BY HON. MARIAMA
KARLEY AMUI ARE SET OUT BELOW

Hon. Mariama Karley Amui’s Conduct as Municipal Chief Executive.Mr. President the Municipal has not had a positive image among the
Constituents upon Hon. Mariama Karley Amui’s assumption of office as MCE.
This, though an open secret, was swept under the carpet by party faithfuls so
as to protect the image of the party going into the 2020 General Election. We
will like to bring to your notice some of the issues;

1. Hon. Mariama Karley Amui approved a budget of Nine Hundred
Thousand Ghana Cedis(GH¢900,000) as the cost of renovating and
converting of a twelve unit classroom block into offices for the
Municipal which was without proper tendering process and value for
money although the general assembly disagreed with the said amount.
The constituency executives and the former MP drew her attention to it
but unfortunately ended up with the MCE conspiring with some
assembly members to fight the MP and the executives thereby
creating factions among the constituency executives. This faction
moved through the spine of the constituency from the Constituency
Executives through the structure to the electorates.
Your Excellency, we believe that as a man who has a strong will for
value for money, this should not be tolerated by you and needs
immediate audit and the offenders brought to book.

2. Hon. Mariama Karley Amui only focused her mandate as MCE in
fighting her own party members in the Municipality. The MCE since
assumption of office has made the Municipal Assembly a criticism
prone office and whoever tried criticizing her office stepped on the tail
of a lioness. Instances includes;
a. An attack on the Constituency Chairman, the then MP and some
executives by the children of the MCE at the party constituency
office one evening after an executive meeting with threats of
further physical assaults if they continue to criticize her dubious act of which she has never condemned the act or apologized till
date .
b. She personally caused the arrest of a former Electoral Area
Coordinator who criticized her on a Constituency Whatsapp
platform. The said coordinator had to spend the night in the
Police cells at the Dansoman Police Station. It took the effort of
the hardworking Constituency Chairman and the then MP to get
him released.
c. Another party member had to sleep out of his house for two
weeks because a gang was sent after him for criticizing the MCE
on the same constituency platform.
d. The MCE recently signed dismissal letters of six(6) hardworking
party members who were actively involved in the struggle for
power in both 2016 and 2020 Presidential and Parliamentary
elections. Rumours has it that they were sacked because they
are close to the former MP Hon. Ebenezer Nii Narh Nartey. Mr.
President, this we believe will have a negative impact in
breaking the 8 year cycle we hope to achieve.
e. The MCE’s boys are selling towed cars of which she has been
mute about to the extent of bailing those arrested for this act.
f. COVID 19 relief items were distributed in only our opposition’s
strongholds at the expense of our strongholds. Party faithfuls
complained bitterly and that also contributed to our loss

3. The Municipal Chief Executive is practicing conflict of interest
with her office. Some instance include;a. The MCE has awarded contracts to herself and her children
without due diligence. Evidence can be found from the
Mambrouk Hospital Project, Desilting of gutters etc
b. The MCE was taking home Two Thousand and Five Hundred
Ghana Cedis(¢2500) every Friday as motivation of which it
took external auditor to stop the act.

4. She brought division among Constituents by forming her own
allies within the Constituency executives, Electoral Area Coordinators
and Polling Station Executives to campaign against the incumbent
Member of Parliament. All those she has surrounded herself with openly
campaigned against the incumbent MP. It came as no news as we
heard of jubilation at the Municipal Assembly premises after the
announcement that we had lost the Ablekuma Central seat.

5. Hon. Mariama Karley Amui as MCE formed strong cabal with the
opposition NDC in the Constituency when the candidate she supported
to contest in the parliamentary primaries lost massively to the then
incumbent MP, Hon Ebenezer Nii Narh Nartey. She always sold
government Protocols and Scholarships to the members of the NDC to
the neglect of NPP supporters.
Those members of her cabal vowed to campaign against the MP
and that led to loss of the seat irrespective of the massive
developmental projects carried out by government and the MP in the
constituency.
Mr. President, it will interest you to know that due to this your votes as
compared to the 2016 election reduced drastically. Sadly enough she
couldn’t use her office to win her own polling station in the 2020
elections. Being the MCE she never visited nor joined in the electoral
area campaign tour.

6. On the fallout from the 2020 General Election, the MCE ordered
the lockdown of shops in the municipality days before the General
Election. The most affected were spare parts dealers at Abossey Okai, our party’s strongholds, it was not surprising when over 13,000 registered
voters at Abossey Okai abandoned the polls.
Her response to a call from Constituency Deputy Organizer as to why
she was locking shops at this critical moment was ‘I have asked the
task force to stop but they have refused to adhere to my order’. If this
was not a plot to sabotage the party in the General Elections, then it is
a pure display of incompetence on her part.

See also  'Ghana Is My Country, I Was Born Here And I Left Here For My Further Studies' - Gyakye Quayson ‘Cries’ Out

7. Finally, your Excellency, it will interest you to know that she
potrays herself as untouchable since she claims she has the backing of
The First Lady of the land Her Excellency Mrs. Rebecca Akuffo Addo.
This we say is a dent on the reputation of Her Excellency.

Conclusion
Your Excellency, based on the above submissions you will agree strongly with
me that Madam Mariama Karley Amui does not deserve a renomination for
Municipal Chief Executive of ABLEKUMA CENTRAL MUNICIPAL ASSEMBLY. She
being renominated will be strongly kicked against by the constituents. Also, it
will further end up disuniting the NPP Ablekuma Central Constituency.
Mr. President, to arrest this unfortunate situation that has befallen this
Constituency, we strongly opine that, when a better person who can help
build the party whilst serving as the MCE is appointed but not Madam
Mariama Karley Amui, our fortunes as a party will greatly improve.
We cannot conclude this without adding our voices to who becomes the
next MCE of this municipal. We strongly recommend the nomination of the
current constituency chairman in the name of Mr Frank Akwasi Debrah as the
next MCE. We strongly believe though his humility, friendliness, hardworking, caring and God-fearing nature, he can serve and unify the party in this
constituency to wrestle back the seat.

We trust and hope our concerns will be given the needed attention for the
future of our Great Elephant Party in the Ablekuma Central Constituency and
Ghana at large.