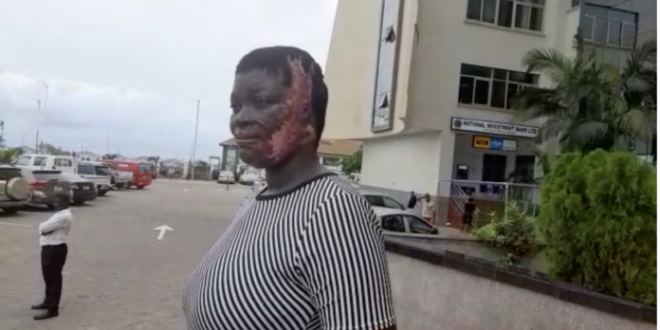 The High Court in Accra has sentenced one Bright Boso, a driver, who was charged for allegedly pouring an acid on his girlfriend to 10 years in prison.

The court presided over by Justice Lydia Osei Marfo convicted him after the court found him guilty of the offence before sentencing him.

Boso, had pleaded not guilty to the charge of causing harm and the case went through full trial.

“Accused is found guilty and convicted accordingly. Sentenced to 10 years in hard labour.

The court also appealed with civil society and philar organizations to help fund the surgery cost of the victim.

The victim who is on the verge of losing her sight need assistance of about GHC60k and GHC6k which is needed immediately for surgery.

Prior to being sentenced, the convict had prayed the court to pardon him to enable him take care of his children.

“I am pleading with the Court to forgive me because if convicted there will be nobody to take care of the kids and the victim,” he told the court

The brief facts of the case presented to the court by Selasie Kuwornu, a Senior State Attorney, were that, the victim Grace Amezando is a 24-year old woman who used to be in a romantic relationship with the accused Bright Boso, a commercial driver.

The prosecutor said, the victim co-habited with the accused in a kiosk on an undeveloped land at Christian Village, Accra and they have two children.

According to the prosecution, sometime in December 2020, the accused Bright Boso accused the victim of cheating on him with one Gyan who lived in their neighbourhood.

According to the prosecution, she joined a bus heading towards Ashongman Estate, but the accused followed her by joining the same bus.

“She alighted at the Ashongman Estate last stop and the accused did same,” the prosecutor told the court.

The accused According to the prosecution, then, verbally abused her in public and told her that she was cheating on him because she was beautiful.

The convict, then threatened her that she would soon look like an old woman.

“He entered their kiosk, poured an acidic liquid on the victim who was sleeping at the time and stepped out again.

“A few minutes after he had stepped out, the victim started feeling burning sensations on her skin and pain in her eye,” the prosecutor noted.

The victim, the prosecutor said, run out of the kiosk for help and she was rushed to the hospital and eventually referred to the Plastic Surgery and Burns Centre at the Korle-Bu Teaching Hospital for treatment.

“She suffered an injury to the eye and burns on her face, chest, breasts and two arms.

“Upon his arrest for the offence, the accused admitted the offence and narrated how after a repair work on the battery of his vehicle, he poured some of the acid taken out of his battery and stored in a container.

The convict also stated that he poured the acid on the victim when he returned from work and after midnight of May 14, 2021.

It is based on these facts that the accused Bright Boso was arraigned for trial.

I'm Adwenpa-Hene |Blogger & Broadcaster Journalist. I am the CEO and manager of this noble website. I publish on Entertainment, Sports, Politics, Lifestyle, and Technology. You can also follow Us on : YouTube Channel - My Ghana Media TV, Facebook - MyghanaMedia TV , Twitter - @MyGhanamedia2 & Instagram - My Ghana Media TV. Email Address: [email protected] Contact Us: 0200818719
@@MyGhanamedia2
Previous Cocoa Production In Western North Reduces From 400,000 To 150,000 Metric Tonnes – Dr Kwaku Afriyie
Next ‘I Had Faith; My Election Victories Confirm That With God, All Things Are Possible’- President Akufo – Addo