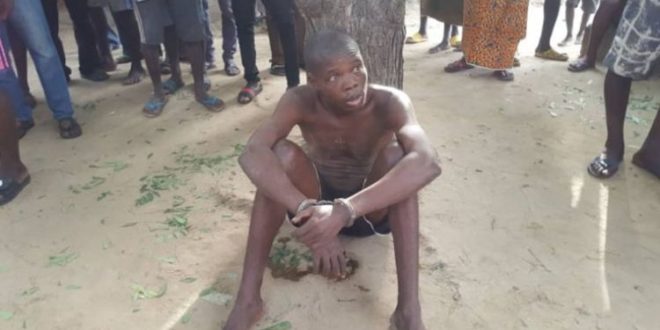 A 31-year-old man who was arrested for allegedly killing his wife at Lufenya, a suburb of Ada in the Greater Accra Region is reported to have died in Police custody.

The Ada Police arrested David Ayornu for slashing the belly of his wife and killing her instantly.

According to residents of Lufenya, near Kasseh in the Ada East District, Ayornu stabbed his wife with a knife in the belly and dragged it multiple times resulting in the outburst of her intestine.

According to him, the District Police on Friday June 3, received information from Nene Glover Ayornu, the Chief of Lufenya, and Akrofi Mensah, the Assembly Member for Amlakpo Electoral Area with two others with a complaint that they heard a loud noise in a nearby room around 0130 hours.

“So, the Chief quickly rushed there because the noise was loud and unusual where he found out that one David Ayornu’s wife, identified as Theresa Kwao was lying dead with the intestine gushed out,” he said.

According to the Chief, the said David Ayornu was in the same room with the woman when they identified that the woman was stabbed to death, so they came for Police assistance to know who caused that.

Chief Supt. Dzineku noted that Police swiftly rushed to the scene and identified a man believed to be 31-year-old as a suspect.

“Police were shown the room, where a female adult was seen wearing only a bead and a pant lying in a pool of blood with the face down with the intestine out.

He explained that initial inspection of the body revealed that live bones of the chest and the stomach and a sharp knife with blood stains on it were found lying in the room about 2 – feet from the body.

He said photographs were taken and the body was deposited at Health Star Funeral Services near Kasseh for autopsy and preservation at Addokope.

The Ada Divisional Commander explained that the suspect Ayornu had been arrested and taken to the Ada District Hospital, where he was examined and discharged but still in police custody for further investigations.

He said the knife was retrieved and detained with the suspect for the investigation, adding that the Police had commenced investigations into the incident to establish what led to the death of Theresa Kwao.