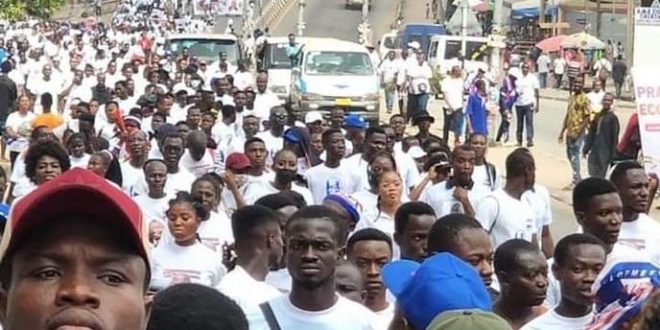 Some supporters of Alan Kyerematen a presidential hopeful of the New Patriotic Party (NPP) who joined the health walk dubbed “Aduru Wo Su” are peeved following how they were treated after the walk.

The supporters who were bused from far and near including Accra to the Ashanti region just to partake in the wellbeing stroll on the morning of Saturday, August 13, 2022 in Kumasi expressed disappointment in the coordinators.

According to them, they were not treated fairly as organisers failed to fulfil their promise to cater for them.

The supporters said they were starved by the organisers who did not provide them with water and food.

Others were of the view that they closed their businesses to travel far to partake in the walk with a hope of getting money to feed their family when they return only to be given peanut.

“We haven’t taken our bath since yesterday (Friday) till this time (Saturday). I took my bath in the evening of yesterday around 7pm and I came to wait for the bus at 8pm at the Motorway Roundabout (Accra Mall) before we set off almost 1am. I am hungry and tasty and also not slept. I even gave my child money when I came around.

“Painfully, after closing my store as an elderly woman like me to come and walk several miles because of the love I’ve for Alan, only to be given GHC50 as if I am a kid.

“Look at my legs. I am also a delegate and we’ll all see what will happen on that day,” an aggrieved Alan supporter said after the walk in a video sighted by DGN Online

Another supporter said her plan is in his head and only wants to arrive home safely.

A directive by the National Executives of the NPP to some individuals from the party not to organize a walk to pay tribute to Alan Kyerematen, was opposed as several people turned up for the walk with participants receiving GHC50.

Many supporters partook in the walk which was aimed towards preparing support for the Trade and Industry Minister’s flagbearership desires for the 2024 polls.

Several supporters clad in t-shirts with picture of Mr. Kyerematen embossed singing and walking to create awareness about the intention of the flagbeaerer hopeful.

Prior to the walk, the General Secretary of the NPP, Justin Frimpong Kodua said he had approached the coordinators to call it off.

He explained the arranged walk would breach the code of conduct set for the selection of the flagbearer race and campaigns.

“I’m asking that for the love and regard they have for me, and in light of a legitimate concern for the party, they cancel the walk,” the General Secretary said.

In a meeting on Kessben FM, the National Organizer of the NPP, Henry Nana Boakye, referring to the party’s set of principles, said the walk will contradict the party’s prohibition on open and undercover missions in front of the authority opening of nominations. “Members, allies and supporters of the party at all levels will not anytime start any get-together covered as exercises or gatherings which has the propensity of advancing the interest of an imminent official or parliamentary competitor,” he cited the party’s set of rules.

I'm Adwenpa-Hene |Blogger & Broadcaster Journalist. I am the CEO and manager of this noble website. I publish on Entertainment, Sports, Politics, Lifestyle, and Technology. You can also follow Us on : YouTube Channel - My Ghana Media TV, Facebook - MyghanaMedia TV , Twitter - @MyGhanamedia2 & Instagram - My Ghana Media TV. Email Address: [email protected] Contact Us: 0200818719
@@MyGhanamedia2
Previous Former PC For Kpone-Katamanso Stokes Fire In NPP, Runs For Cover
Next Shake Up Looms At GRA