Afia Schwarzenegger’s “A wise man once said and I quote, ‘any idiot can go to court’” is believed to be a message to Chairman Wontumi, who has sued her for GH2million damages over sex claims. 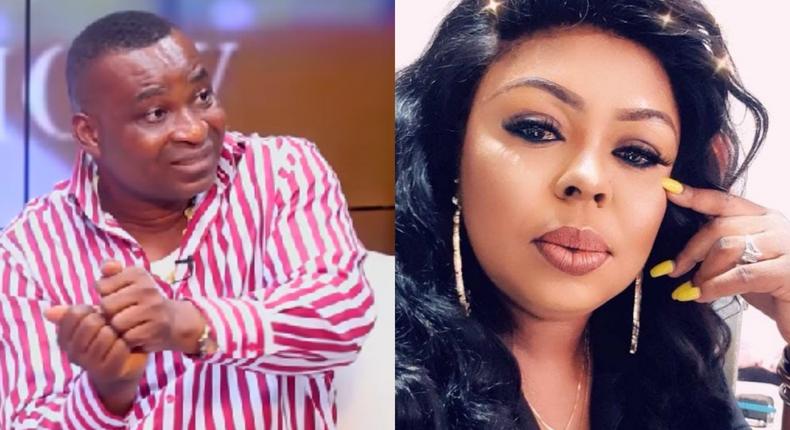 In a writ addressed to the social media commentator, Valentina Nana Agyeiwaa, as the defendant, from the Ashanti Regional Chairman for the New Patriotic Party, Bernard Antwi Bosiako, as plaintiff, the former is being sued for a sum of Two Million Ghana Cedis (GHC 2,000,000.00) for defaming him.

Chairman Wontumi has dragged Afia Schwarzenegger to court for claiming that she has slept with him and he farts when he is ejaculating.

The suit comes after Afia Schwarzenegger in a recent video sworn with a bottle of schnapps and cracked eggs that she has slept with Chairman Wontumi.

The social media commentator was responding to Lawyer Maurice Ampaw who said Afia Schwarzenegger is not up to Chairman Wontumi’s standard, therefore, her claims of sleeping with him are not true.

His comments have infuriated Afia Schwarzenegger who has decided to call the gods into the matter. This morning she posted a video of herself invoking the gods to kill her if she lied about sleeping with Chairman Wontumi.

“If I am the one disgracing the man because he is God and couldn’t have slept with me so if the man hasn’t slept with me and I claim so then the gods of Antoa should kill me,” she said and then proceeded to curse Maurice Ampaw.

Responding to this, Chairman Wontumi in his suit is seeking “a perpetual injunction restraining the Defendant, her workers, servants, allies, agents, assigns or anybody claiming or taking instructions from her from further publishing any further defamatory material against the Plaintiff”.

“An order directed at the Defendant compelling her to cause to publish on her social media handles as well as all media houses and blogging sites in Ghana to render an unqualified apology to the Plaintiff and immediately retract the defamatory statement within three (3) days of judgment“.

It all began when Afia Schwarzenneger went ballistic over Delay’s new employment with Plaintiff. She hurled many accusations, including describing how Chairman Wontumi fluctuates when he reaches orgasm.

This obscene revelation prompted a response from Lawyer Ampaw, who also alleged that Afia was not Chairman Wontumi’s standard. To which Afia Schwar responded with curses, which has now ended in a legal tussle.