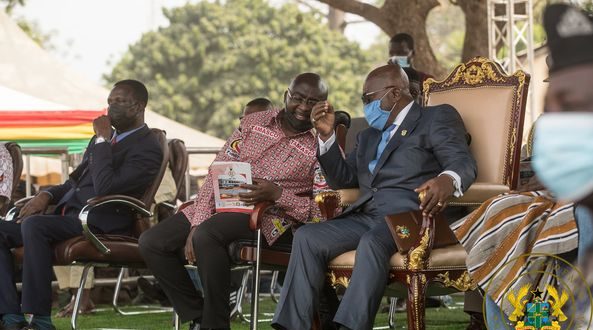 President Akufo-Addo has put up a spirited defense of one his administration’s flagship programmes, the Free Senior High School (Free SHS), indicating that the policy is working.

Addressing a ceremony in Tamale to mark the 70th anniversary of the Tamale Senior High School (Tamasco) on the 11th of December 2021 under the theme; “Tamasco at 70: Leading Secondary Education in Northern Ghana”, President Akufo-Addo said, “Five years on following the implementation of the Free Senior High School policy, which has granted a minimum of senior high school education for 1.6 million Ghanaian children, I can comfortably state without any equivocation that I am very proud of the policy and of its results thus far”.

“Yes, there have been challenges associated with this policy, for which government has addressed a substantial many of them,” the President noted.

“A look at the WASSCE results of the first batch of free SHS graduates, who I choose to call the ‘Akufo-Addo graduates’, and that of those whose results has just been released give further evidence of why the Free SHS policy has been a success so far,” President Akufo-Addo added.

Citing the 2021 WASSCE results and comparing same to the results of 2016, the President justified even the more, his position that the Free SHS programme is a success.

According to the President, “Yet another indication of the value of the policy is the dramatic increase in the percentage of students from this school [Tamasco], who have qualified to attend university”.

The President further affirmed, “Surely Chairperson, there can no longer be any controversy about the value victory of the Free SHS policy and its consequential measures. It is working!”

“Let us forgo partisan parochial consideration which contrive little benefit and all agree that Free SHS has to be a part of our national educational architecture for at least a generation, if not forever. Our nation will clearly be empowered and enriched,” President Akufo-Addo added.

President Akufo-Addo in his address called on teachers of all secondary schools in Ghana to set examples worthy of emulation by their students who are under their care.

“Teachers must also bear in mind that they are role models for students and they set the bar for excellence. They must therefore project excellence to their students,” the President said.

“Parents and guardians too have a responsibility to advise their wards to exhibit good behavior in school or wherever they may be. They are partners with the school in educating their children,” the President further stated.

Tamale Senior High School formerly Government Secondary School, Tamale, Gbewaa Secondary School, and more recently Tamale Secondary School is a co-educational second cycle boarding school located at Education Ridge, a suburb of the Sagnarigu Municipality (which was carved out of the Tamale Metropolis in 2012) in the Northern Region of Ghana.

The school was founded in 1951 by the then British Colonial Authorities as the first second cycle institution of the Northern Territories.

Tamale Senior High School is considered amongst institutions of the highest prestige in Ghana, due to its longstanding history predating independent Ghana, and its prominent alumni.

The school can count amongst its ranks; a head of State,  two vice presidents of the fourth republic of Ghana, a speaker of parliament, two Justices of the Supreme Court of Ghana, two Chiefs of Defence Staff, and a host of government ministers and members of parliament.

I'm Adwenpa-Hene |Blogger & Broadcaster Journalist. I am the CEO and manager of this noble website. I publish on Entertainment, Sports, Politics, Lifestyle, and Technology. You can also follow Us on : YouTube Channel - My Ghana Media TV, Facebook - MyghanaMedia TV , Twitter - @MyGhanamedia2 & Instagram - My Ghana Media TV. Email Address: [email protected] Contact Us: 0200818719
@@MyGhanamedia2
Previous WAEC Apologises For Technical Hitch On WASSCE Results Platform
Next Kotoka Airport: Airlines To Pay $3,500 On Each Unvaccinated Passenger They Bring In