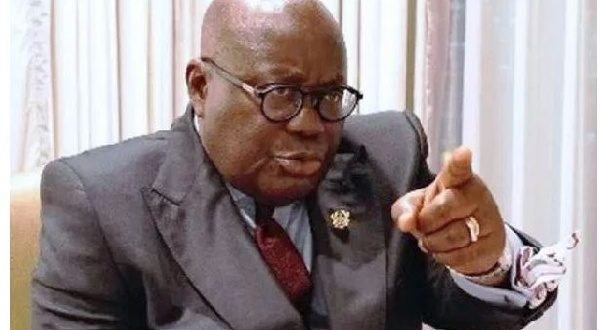 The President of Ghana, H.E Nana Addo Dankwa Akufo-Addo has pointed out that some foreign elements are neck-deep in regime-changing moves in Africa to serve their parochial interests.

“Some foreign entities regard coups in Africa as a means of enhancing their regional ambitions,” he noted.

“As such, they engage in all sorts of disinformation campaigns in a bid to disparage the authority of democratically elected authorities and instigate opposition protests against the incumbent.”

Ghana’s leader made these known on Tuesday, March 15 when he opened a forum on coups in Africa.

He expressed worry over the re-emergence of coups in Africa, calling for their condemnation and suppression.

“The reappearance of coups in Africa in all its forms and manifestations must be condemned by all since it seriously undermines our collective bid to rid the continent of the menace of instability and unconstitutional changes in government as currently defined by the frameworks enshrined in the Lome Declaration.”

Recent coups in Mali, Guinea, Burkina Faso and a failed one in Guinea-Bissau has been a matter of worry to West African leaders.

At the start of an emergency meeting of the Economic Community of West African State (Ecowas) in January, Ghana’s leader, who is also the Chair of the Authority of Heads of State and Government, charged leaders to nip coups in the bud.

“The deteriorating political situation in our region should be a matter of grave concern to all of us,” he conceded.

“No country is insulated from the occurrence in the community and we have to take action to nip it in the bud.”

At the 65th Independence Anniversary celebration in Cape Coast on Sunday, March 6, President Akufo-Addo sent a strong warning to persons toying with the idea of coup in Ghana.

“Let us guard jealously the peace and stability we are enjoying. There are some restless spirits amongst us who, seeking to exploit the current difficulties confronting the nation, claim to have lost confidence in our democratic system.

“Either the absence of faith in the prospect of democratic alternative to the current government or their impatience to wield executive authority are the factors driving their appetite for the short cut of military intervention.

“Whatever be the case, they seem ready to jeopardise the hard-won reputation of our country as beacon of democracy and stability in Africa and indeed, in the world, in order to gratify their personal ambition, ambitions which show little or no respect for the capacity of the Ghanaian people to change when necessary their government peacefully through the ballot box, something we have done on three separate occasions in the 29-year life of the Fourth Republic.

“The great majority of us who are committed to democratic values and institutions will continue to resist the claims of these adventurers and deploy all legitimate means in our democracy to maintain our free open system of governance which has respect for human rights, the rule of law and the principles of democratic accountability.”

I'm Adwenpa-Hene |Blogger & Broadcaster Journalist. I am the CEO and manager of this noble website. I publish on Entertainment, Sports, Politics, Lifestyle, and Technology. You can also follow Us on : YouTube Channel - My Ghana Media TV, Facebook - MyghanaMedia TV , Twitter - @MyGhanamedia2 & Instagram - My Ghana Media TV. Email Address: [email protected] Contact Us: 0200818719
@@MyGhanamedia2
Previous MASLOC CEO Praised For Introducing Massive Reforms
Next Words Against Coups Without Action Will Achieve Nothing – Nana Addo