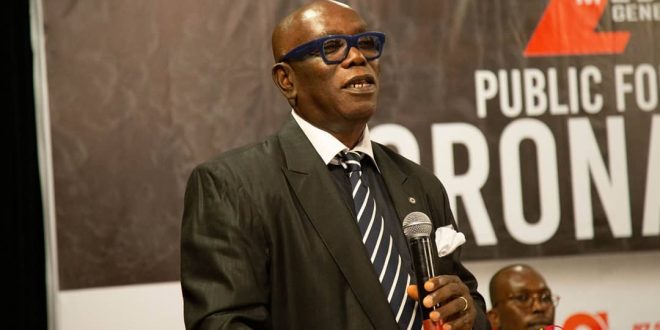 The President and CEO of the Institute for Security, Disaster and Emergency Studies, Dr. Ishmael Norman has said the current New Patriotic Party (NPP) administration is full of old people with colonial mindset.

In his view, these officials are still adopting old ways of governing the country.

His comments follow the gruesome murder of Macho Kakaa in Ejura over the weekend.

There was also a violent clash among the military officers and the youth of the area who were demonstrating in that town on Tuesday, June 29 following the murder.

This led to the death of two persons with four sustaining various degrees of injury.

Speaking on TV3’s Key Points on Saturday July 3, Dr Norman said “The Regional Minister boldly proclaimed that he actually gave the order. I am sure the DCE fed him information that compelled him to make that decision.

“He didn’t go for a second opinion, he didn’t do any kind of cross checking  and gave the order to the  Army and the Police .

“You have to realize that a lot of people in our current government have colonial mentality. They are old people who think that the soldiers are the best weapons to use.”

He further indicated that the current Inspector General of Police James Oppong-Boanoh, is confused when it comes to issues relating to critical decision making.

The IGP had explained to the Public Accounts Committee (PAC) of Parliament the circumstances under which Police officers can shoot at protesting crowd.

He stated that the laws permit the men and women in uniform to use lethal force when their lives are in danger.

He said “Honourable Chair, you and I know that in very fluid situations, there are no hard and fast rules when the lives of the Police officers are threatened, that they should go through all these. So, depending on the nature of the situation you are dealing with, then you can go through all these.

He added “Yes, we do have a manual on the use of force. Normally, you will speak to the people through a megaphone or you shout if they can hear you and you spray water, you throw tear gas and then you use blank amour and eventually you use live amour,” he explained.

See also  Ejura killings: Ambrose Dery Is A Person Of Interest, Commission Of Inquiry The Way To Go – Security Analyst

He further explained that even though protestors may not be carrying deadly weapons, the officers still need to protect themselves.

“Let me add that if you are dealing with unarmed demonstrators, then you will not go for live amour, but when you see somebody in the crowd holding a weapon which is capable of being used to kill or injure a Police officer, our laws permit us to use lethal force to eliminate that threat to the officers on duty. So, it depends on the situation you are dealing with,” he said.

“What people don’t know is ‘A’ may be armed, ‘B’ may not. So, being in the crowd doesn’t necessarily mean you know what is happening but technically, you are responsible for whatever the person is doing. So, we take steps to eliminate that threat to the officers,” he said.

Dr Norman said “I think the IGP is confused about critical decision making at the sight of an event. The Police manual he is talking about is just operations manual – what to do, how to confront critical event. I know he is responding to something I had raised already that the Police doesn’t have a critical decision making manual or model. The Army doesn’t have it  and the IGP, if he needs my help  I am willing to  help because as I sit here I actually have a paper that is proposing  and suggesting a model critical decision  model  for West African police departments . So, I think the IGP is totally confused.”