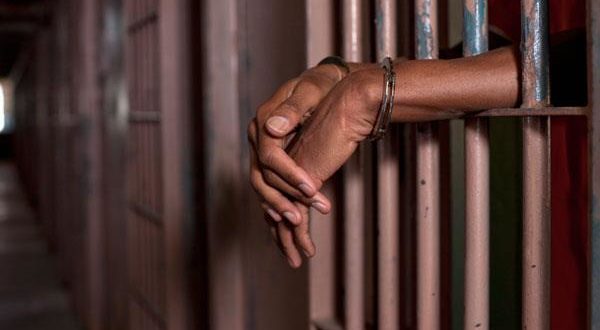 The Ofoase Magistrate Court in Eastern Region has sentenced Kofi Owusu, the man who hired “area boys” to molest his 15-year-old stepdaughter and recorded the act.

He was convicted on his own plea.

The Akyemansa district Police Commander Superintendent George Bawa said the wife of the convict Sarah Frimpong who reported herself to police was discharged after interrogation.

The convicted step-dad Kofi in response to his daughter’s alleged waywardness hired and led a group of neighbourhood boys to abuse and sexually molest the victim.

The victim was said to have left the house on Friday, 27th May, 2022 and failed to return home until Saturday morning, provoking the step-father to organize some boys within the neighbourhood to beat her up, only for them to end up torturing and sexually assaulting her in the process.

The inhumane act captured on video visual begins with the victim brushing her teeth in the morning when the three boys holding canes accosted her and poured water over her. Next, they viciously splashed volumes of water on her, chanting, “Today, we’ll wash a vehicle” in the process.

With the victim now wailing uncontrollably, one of her assailants whom the victim consistently referred to as Paapa then began removing her upper wear, leaving her with only her braziers on.

Another boy then joins him as they hold her by the hands and legs and forcibly removed her ‘skin-tight’ trousers, leaving her stark naked in the process.

They then marched her into a nearby bush, beating and caning her naked body in the process. At a point, Paapa gropes her violently from behind before inserting his fingers into her private part.

A man, identified as her step-dad, now emerges in the video also with a cane with which he also mercilessly whips the victim.

The other boys, now join in the beating as they lead her back to the house.
The victim in an audio recording available to this portal is heard narrating her ordeal to her uncle. She admitted leaving the house and spending the night outside but claimed that she spent the slept at her friends’ place.

According to her, she met the three boys in the morning who told her, her step-father had sent them to come beat her. She furthered that during the assault, one of the boys told her that she would have been spared this ordeal if she allowed them to sleep with her.

She said, “my step-father got two canes to beat me, one broke and he took the other. I ran away and one of the boys pursued and told me all this wouldn’t have happened if I allowed them to have sex with me and the other inserted his finger into my private part.”

The victim alleged that her ordeal did not end there as upon reaching the house, the father instructed the boys to insert pepper into her private part. She complained, “My father asked one of them to bring pepper which they inserted into my private part and poured water on me.”

Police sent the victim to the hospital for treatment and launched manhunt for the parents .