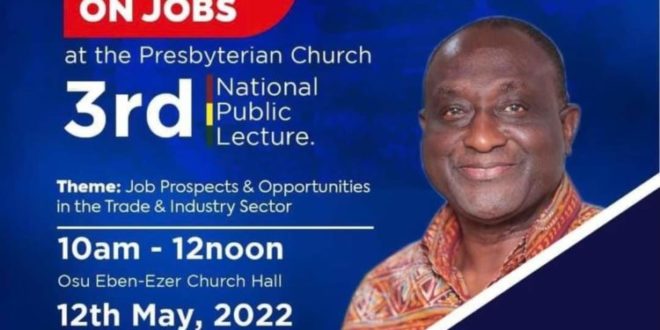 One of the contenders for the New Patriotic Party (NPP) flagbearership race, Alan Kwadwo Kyerematen, is taken his campaign to another level later today, Thursday, May 12, 2022.

He has sent notice of a planned National Public Lecture. It is dubbed “Alan speaks on jobs” will take place inside the Osu Eben-Ezer Presbyterian Church Hall, in Accra from 10am to 12 noon.

The theme of the national address is “Job prospects and opportunities in the  trade and industry sector”.

The announcement, has since left many wondering why he chose the Eben-Ezer church hall, where now President Nana Akufo-Addo, used to address the nation before and after he became the flagbearer of the NPP.

The argument has been that Mr Kyerematen, would have held the event at the Trade Ministry or the Ministry of Information.

Some NPP members, habour the view that holding the event outside the Trade Ministry, shows the use of government platform and working hours to campaign.

Meanwhile, there are suspicion that Mr Kyerematen, would soon announce his departure from the Akufo-Addo government to focus on his presidential ambition.

Mr Kyerematen, who has been credited with the one-district-one-factory concept ahead of the 2016 general election which brought    President Nana Akufo-Addo to office in January 2017, however, has had difficulty speaking directly and specifically to the number of jobs the policy has created.

The factories are difficult to create, and attempt to revise the programme had seen existing ones labelled as part of the 1D1F concept where monies would be dolled out to them for investment and expansion but many of them say despite the flowery words and eye-catching slogans have not resulted in the cash they  were promised.

Just this week, Casa de ropa, a potato processing factory in the Central Region, lamented about a 3 million Ghana cedis cash the government promised it under 1D1F from Ghana Exim Bank, which is under the Trade Ministry but the cash has come two years after the promised.

There are also claims of some expatriate have collected some huge sums from private commercial banks and guaranteed by the government and fled the country.

The economy under Akufo-Addo isn’t performing well, but it is not clear, if Mr Kyerematen, will touch on this, aside the promise of jobs which many Ghanaian politicians, especially those seeking the presidency, have used to entice the electorates.

I'm Adwenpa-Hene |Blogger & Broadcaster Journalist. I am the CEO and manager of this noble website. I publish on Entertainment, Sports, Politics, Lifestyle, and Technology. You can also follow Us on : YouTube Channel - My Ghana Media TV, Facebook - MyghanaMedia TV , Twitter - @MyGhanamedia2 & Instagram - My Ghana Media TV. Email Address: [email protected] Contact Us: 0200818719
@@MyGhanamedia2
Previous Ghana In Right Direction; No Going Back To IMF – Finance Minister Says
Next Ashanti Region: Akonkodease And Asrim Royal Family Reject Enstoolment Of K.K Sarpong As A Paramount Chief