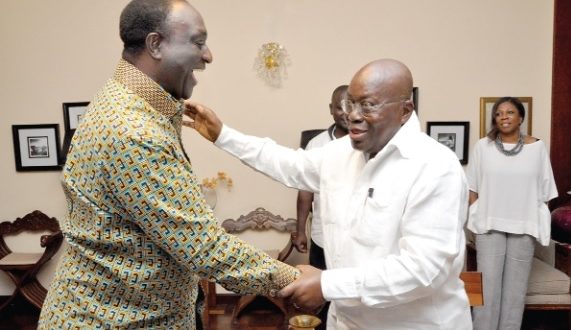 A Founding member of the New Patriotic Party (NPP) Dr Nyaho Nyaho-Tamakloe has said that the Akufo-Addo government has been plagued with series of corruption for which Trade Minister, Alan John Kwadwo  Kyerematen should have resigned.

Dr Nyaho-Tamakloe said he would have followed Mr Kyerematen if he had had the courage to resign from the current government that in is view, has been neck deep in series of corruption scandals.

Speaking in an interview with TV3’s Johnnie Hughes, he said “The Alan case, Alan is nice gentleman but politics you don’t use nice gentleman to do politics. You will need people who are strong, people who can say this is it, I stand by it.

“We have had series of corruption cases in the government in which Alan is a member. If Alan had resigned, I would have followed him anywhere, he did not have the courage to do so and as such I don’t see him as a leader.”

In the case of Vice President Dr Mahamudu Bawumia, Dr Nyaho-Tamakloe said the structure of the NPP will make it difficult for him be the flagbearer and eventually, President of Ghana.

The Ghana’s former ambassador to Serbia and Montenegro under the Kuffour’s Administration said he has known Dr Bawumia for quite sometime and can attest to the fact that he is a fine gentleman however, the NPP will make it difficult for him to achieve his ultimate ambition of becoming Head of State.

“I did an interview, it was with a foreign magazine, I will find out if I still have it, I will share with you, where I made plain that by the structure of our party, Bawumia cannot come to power.

“Bawumia is a fine gentlemen, if Bawumia would have had that independent mind and strength and not just always praise what the president has done or has not done, I would have looked at him differently, I know Bawumia very well..”

I'm Adwenpa-Hene |Blogger & Broadcaster Journalist. I am the CEO and manager of this noble website. I publish on Entertainment, Sports, Politics, Lifestyle, and Technology. You can also follow Us on : YouTube Channel - My Ghana Media TV, Facebook - MyghanaMedia TV , Twitter - @MyGhanamedia2 & Instagram - My Ghana Media TV. Email Address: [email protected] Contact Us: 0200818719
@@MyGhanamedia2
Previous NPP Contacts Successful Aspirants After Vetting
Next Dr. Bawumia Is Fine But NPP Structure Will Make It Difficult For Him To Be President – Dr Nyaho-Tamakloe