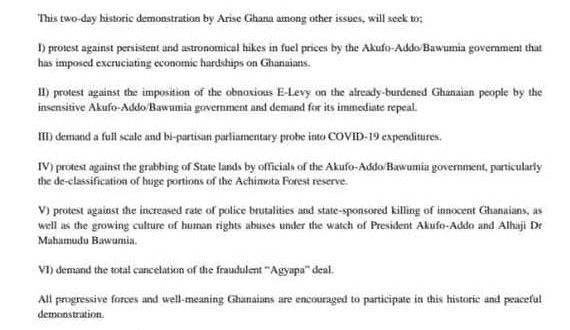 All Is Set For Historic Arise Ghana Demonstration

The Criminal Division of the Accra High Court has partially granted an application from the Ghana Police Service to restrain and prohibit Arise Ghana from embarking on a demonstration which sought to end at 10 pm.

DSP Sylvester Asare made references to reports of terrorism in neighbouring country Togo to argue their case and wanted the demonstration to end at 3 pm.

Counsel for the Respondent (Arise Ghana) led by Godwin Edudzie Tamakloe argued that the police has not demonstrated how the Togo terrorism which took place in the afternoon comes to play in a demonstration which was to be held in Ghana at night.

The bone of contention between the Police and Arise Ghana which landed in court was the venue for the demonstration and the time it would be ending.

The court also said, the intended demonstration should start at 8 am and end at 4 pm.

The said petition the court said should be received by a representative of the President if any.

Below is the statement released by Arise Ghana

The High Court has ruled that the Arise Ghana Demonstration scheduled for tomorrow, Tuesday 28th June 2022 should take place between the hours of 8am and 4pm on the route proposed by the Ghana Police.
Lawyers for Arise Ghana have consequently filed a Notice of Appeal and an application for Stay of Execution of the said Order. The Police have been duly served. The demonstration will come off as planned. Protesters shall be converging at the Obra Spot/Kwame Nkrumah Interchange between the hours 10am and 12PM.
This two-day historic demonstration by Arise Ghana among other issues, will seek to;
I) protest against persistent and astronomical hikes in fuel prices by the Akufo-Addo/Bawumia government that has imposed excruciating economic hardships on Ghanaians.
II) protest against the imposition of the obnoxious E-Levy on the already-burdened Ghanaian people by the insensitive Akufo-Addo/Bawumia government and demand for its immediate repeal.
III) demand a full scale and bi-partisan parliamentary probe into COVID-19 expenditures.
IV) protest against the grabbing of State lands by officials of the Akufo-Addo/Bawumia government, particularly the de-classification of huge portions of the Achimota Forest reserve.
V) protest against the increased rate of police brutalities and state-sponsored killing of innocent Ghanaians, as well as the growing culture of human rights abuses under the watch of President Akufo-Addo and Alhaji Dr Mahamudu Bawumia.
VI) demand the total cancelation of the fraudulent “Agyapa” deal.
All progressive forces and well-meaning Ghanaians are encouraged to participate in this historic and peaceful demonstration.
Comrade Ishaq Awudu
National Communication Secretary, PNC and Leading Member of Arise Ghana

See also  God will judge The prophets of Ghana , They Have Sex In Their Offices - Prophet Kofi Oduro