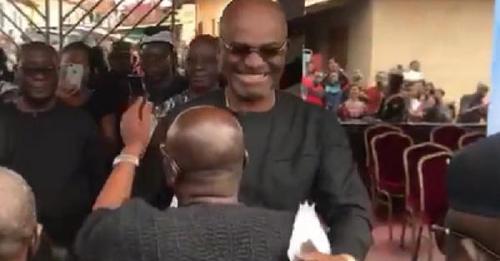 All Smiles As Dr. Bawumia Meets Ken Agyapong At funeral

A video clip shared by a pro-Bawumia activist on Twitter showed the veep greeting a smiling Agyapong with his back to the cameras.

He proceeded to greet, hug and wave at other people at the venue where the funeral of the mother of lawyer Kwame Gyan was being held.

“His Excellency Dr Mahamudu Bawumia (@MBawumia) earlier this morning attended the funeral of the late mother of Lawyer Kwame Gyan. The love is deep! #DaakyeHene,” the activist known as General Buhari captioned the tweet.

His Excellency Dr Mahamudu Bawumia (@MBawumia) earlier this morning attended the funeral of the late mother of Lawyer Kwame Gyan.

Kennedy Agyapong has this week taken shots at Bawumia in a viral audio clip, among others, for his handling of the economy and for ostensibly allowing himself to be controlled by the Minister of Finance Ken Ofori-Atta.

The Assin Central lawmaker, who is seeking the flagbearership slot of the New Patriotic Party (NPP) ahead of the 2022 elections, was addressing party members in the north during his campaign when he ‘fired’ at Bawumia.

All three have issued public statements to dismiss almost all of the claims that Agyapong made against them.

I'm Adwenpa-Hene |Blogger & Broadcaster Journalist. I am the CEO and manager of this noble website. I publish on Entertainment, Sports, Politics, Lifestyle, and Technology. You can also follow Us on : YouTube Channel - My Ghana Media TV, Facebook - MyghanaMedia TV , Twitter - @MyGhanamedia2 & Instagram - My Ghana Media TV. Email Address: [email protected] Contact Us: 0200818719
@@MyGhanamedia2
Previous Mahama Slams ‘Irresponsible’ NPP MPs Who Abandoned Budget Debate For Qatar
Next A Lady Reveals How Her Father Started Having Sex With Her When She Was 3 Years