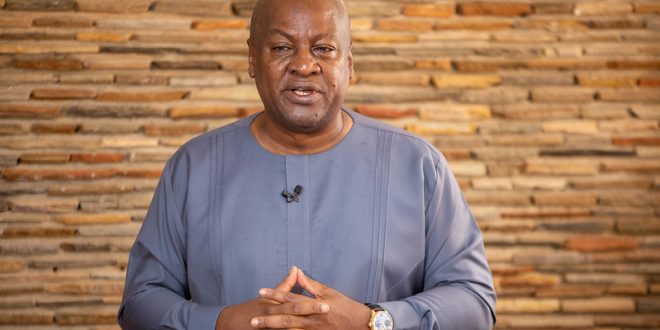 Former President, John Dramani Mahama, says allowances for the spouses of Presidents and Vice Presidents, are already provided for under the budget of the Office of the President.

In a statement responding to the debate on the recommended emoluments for allowances for the spouses of Presidents and Vice Presidents, Mr. Mahama explained that these allowances date back to the Rawlings administration.

Mr. Mahama further explained that the practice thus far had been that, for the advocacy and humanitarian roles they play, some expenses of the spouses of the President and Vice President in carrying out their expected roles are funded by the Office of the President.

He said this includes fuelling of vehicles, security, clerical staff, stationery, hosting of local and foreign guests, and all such expenditures.

In a statement, Mr. Mahama suggested that the Akufo-Addo government is attempting to “sneak the First and Second Ladies into the article 71 office holders’ group”, saying “This is clearly problematic.”

He argued further that the new emoluments are tantamount to altering an entrenched clause in the constitution without due process.

“Article 71 is an entrenched clause in the 1992 Constitution, and nothing short of a referendum can be used to amend or vary that clause as per article 290 of the Constitution,” he explained.

“The Committee, and indeed the government, cannot use a short-cut to circumvent well laid-out constitutional rules,” added.

The emoluments were part of recommendations by the five-member Professor Yaa Ntiamoa-Baidu set up in June 2019 by President Nana Akufo-Addo to make recommendations on the salaries and other gratuities of Article 71 officeholders.

Per the recommended emoluments, the spouse of the President is to be entitled to the payment of a salary equivalent to a Cabinet Minister MP while in office.

For the spouse of the Vice President, they will be entitled to payment of salary equivalent to a Cabinet Minister non-MP when in office.

Mr. Mahama also said the controversy surrounding the new emoluments is further proof of the need for an Independent Emoluments Commission. He thus called on the government to consider the setting up of an independent body to review emoluments.

“I believe that instead of trying to unconstitutionally enlarge the scope of Article 71 office holders for the purposes of determining emoluments, the government must as a matter of urgency set up the Independent Emoluments Commission.”

“If this proposed Independent Emoluments Committee is established, the Commission will not only stop the practice of setting up a new emoluments’ committee every four years and coming up with varying recommendations, but will ensure that salary administration in Ghana is rationalized and equity is brought into the system,” Mr. Mahama said.

Lawsuits against allowances for presidential spouses

Two suits have already been filed at the Supreme Court to challenge the payments to the First and Second Ladies.

The opposition National Democratic Congress, as well as the Alliance for Social Equity and Public Accountability (ASEPA), have also served notice of going to court over the same issue.