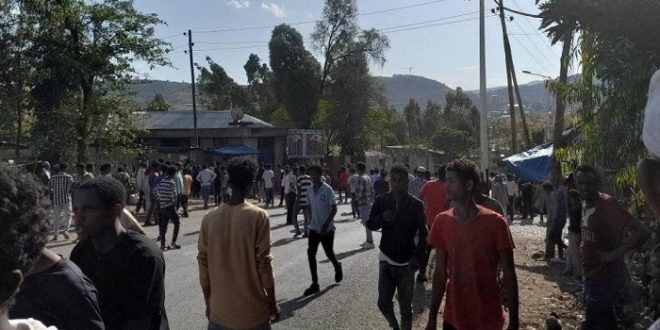 Twenty Muslim worshippers have been killed in Ethiopia’s Amhara region after an ambush by unidentified armed men, an Islamic leader in the region said.

The violence was unrelated to conflict in the neighbouring Tigray region, which began in November 2020 and spilled over into Amhara and Afar regions last year.

“The incident happened yesterday when Muslims were on their way to bury an individual,” Seid Muhammed, president of the Amhara Islamic Affairs Supreme Council, told Reuters on Wednesday.

Seid said the armed men threw an explosive device at the Muslim crowd in the town of Gondar, killing three people and wounding five. The other victims died in the ensuing chaos.

“There were looting of shops and there were attempts to set fire to three mosques. One mosque suffered minor damage where its mat was set on fire,” he said.

Gizachew Muluneh, spokesperson for the Amhara regional administration, said the incident was under investigation and an update would be given later.

A humanitarian source said 15 injured people had been transported to Gondar Referral Hospital, and it was unclear how many had been shot or injured by explosives.

In 2019, authorities arrested five people suspected of burning down four mosques in the town of Motta in the same region.

Fighting in Ethiopia’s wider conflict had eased since the federal government declared a unilateral ceasefire last month, saying it would allow humanitarian aid to enter Tigray.

When Prime Minister Abiy Ahmed took power in 2018, he introduced sweeping political and economic reforms that won him international praise, culminating in the award of the Nobel Peace Prize for peacemaking efforts with longtime enemy Eritrea.

However, regional elites have said Prime Minister Abiy’s reforms had centralised power to the detriment of Ethiopia’s federal character, and some had sought to assert their own authority, leading to strife.

Tigrayan rebels have agreed to a “cessation of hostilities”, a turning point in the nearly 17-month war in northern Ethiopia, following the government’s announcement of an indefinite humanitarian truce a day earlier.

In a statement sent to AFP early on Friday, the rebels said they were “committed to implementing a cessation of hostilities effective immediately,” and urged Ethiopian authorities to hasten the delivery of emergency aid into Tigray, where hundreds of thousands faced starvation.