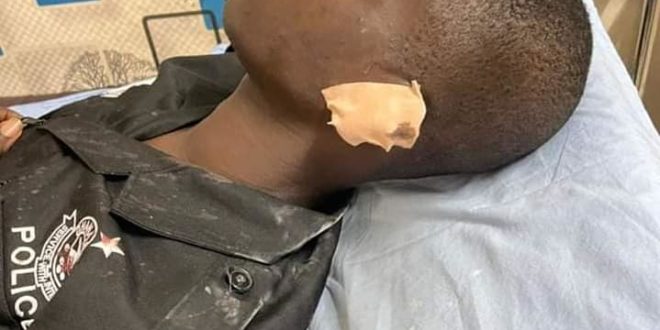 The opposition National Democratic Congress (NDC) has justified that the stones pelted by some of their members against the Police during the first day of Arise Ghana demonstration was in self-defense.

According to the Deputy National Youth Organiser of the NDC, Edem Agbana, the Police started firing tear gas at them during the exercise without any provocation, hence the need to also fight them.

He explained that “Self-defense is seen as legal, they were only reacting to the action of the Police,”.

He further accused the Police of recklessness, adding that they were embarking on a peaceful demonstration only for the Police to start firing tear gas at them.

“I think that what happened is unfortunate, this is not what we bargained for. We are peaceful demonstrators, unarmed protesters sending a clear message to the government that the economy is in a mess”.

The Police however have accused the demonstrators of attacking them by describing the situation as shameful.

The Police in an earlier tweet said “Attack on Police in the ongoing Arise Ghana Demonstration What a shame, we were there to protect you and ensure your safety, but you throw stones at us, injure and hurt us. This behavior is unacceptable and must be condemned.”

In a statement issued and signed by the Director of Public Affairs, Chief Supt Grace Ansah Akrofi, said 12 of its officers sustained various degrees of injuries as a result of the stones pelted at them.

The statement said, the officers were treated in the Police Mobile Hospitals and had been transferred to the Police Hospital for further treatment.

This followed a clash between the officers and the NDC hooligan supporters over unapproved routes contrary to the court orders, the organizers insisted on using routes leading to the Jubilee House.

The protestors violently pelted stones at the police and damage their vehicles.

“All attempts to persuade them to comply with the court-approved routes did not yield the expected results”.

The statement added that “Unfortunately and without any provocation, the demonstrators began pelting the police with stones” adding that “the demonstrators further regrouped and burnt tires on the road around Circle”.

Due to that, the Police had no option but to use tear gas and water cannons to subdue the rioting and restore order.

“Thereafter, the road has partially been cleared and we urge all road users to continue to bear with us and use alternative routes where possible as we take steps to fully disperse the rioting demonstrators,” the statement said.

“We wish to assure the public that all those involved in this violent demonstration will be brought to face justice” the statement added.

Meanwhile, over 15 protesters have been arrested by the Police and are currently being detained.