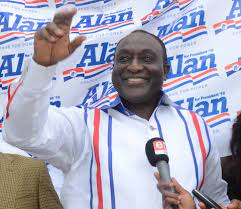 Article: Why Alan Kyeremanten Is Best Personality To Lead The NPP

Some New Patriotic Party (NPP) supporters from last week have been asking about why I’m advising their delegates and party to choose Hon. Alan Kwadwo Kyeremanten as their Flagbearer for the 2024 elections.

I think that’s a more legitimate question than accusing me of defaming Dr Muhammadu Bawumia merely for pointing out why citizens are annoyed with him.

Well, to those serious minded NPP members who sincerely desire to know why methinks Alan is the most appropriate choice of leader, certainly, a number of factors should help the party decide.

The most important is party unity at this stage.

NPP, as it stands now is deeply divided, full of antagonisms and bitterness, resulting in a very worrying level of apathy among a significant section of party members. The situation, if not remedied, portends serious risk for the Party’s chances of winning in 2024.

The task of uniting the party ahead of 2024 will depend on the presidential candidate. Of all the names coming up, Alan is one personality who clearly has what it takes to unite the party in order to improve the party’s chances of winning.

Without a United Party it will be near impossible for NPP to win 2024.

Alan has shown his commitment and capacity to unite NPP by sacrificing his own presidential ambition in 1996 and 2007 in favour of party unity.

Ahead of the 1998 presidential primaries, party elders such as Appiah Menka talked Alan out of contesting in favour of older party personalities like Kufuor and Adu Boahen, although these conceded that at the time Alan could have beaten the contesting elders at the primaries.

In 2007, Alan stood down for Akufo-Addo and saved the party acrimony, hostility and tensions that were threatening the peace and unity of the party. Alan graciously conceded to Akufo-Addo without insisting on his constitutional right of a run-off, thus again sacrificing his presidential ambition for party peace and unity.

It’s only reasonable that party members and delegates consider first the health of the party without which, they’re bound to lose before the main general elections campaigns start.

Considering prevailing sentiments of citizens across the country, of all the people being promoted as aspirants now, Alan is the personality that many Ghanaians are likely to accept as credible, honest, truthful, trustworthy and reliable because of his natural repose and how he’s managed his communication over the years. It shall, therefore, cost the party less resources, time and energy to work on his reputation and use it as a huge political capital.

If how Nana Akufo-Addo’s administration struggled to secure a second term is anything to go by, then, citizens are almost, if not, already tired of the incumbent party in government. What this means is that the party needs a candidate that comes with huge credibility to propel the party to break the 8.

And, Alan is that personality who could carry the positives of Akufo-Addo’s administration to consolidate the gains of the party without being condemned with what he did or said before or after President Akufo-Addo came to power. This is because he’s a relatively positive cumulative communication record.

Furthermore, he’s a candidate that majority of Ghanaians percieve as a result-driven doer than a mere talker. In both John Kufuor’s and Nana Akufo-Addo’s administration, he distinguished himself thus carrying that aura of integrity and competence great leaders possess.

More electorally relevant, he has very strong links with the largest religious, ethnic, business, professional and other major constituencies across the political landscape with a strong attraction to minority groups as well.

It’s also very obvious that the international community trust in him and would be more willing to engage and co-operate with the Trade and Industry Minister judging from his personal achievements in both John Kufuor’s and Nana Akufo-Addo’s government.

Hon. Alan Kwadwo Kyeremanten is the most appropriate personality to lead the NPP to victory and lead Ghana from where President Akufo-Addo would be exiting. He’s well groomed and prepared for the job ahead. What the NPP and Ghana need at this moment is reliable leadership.