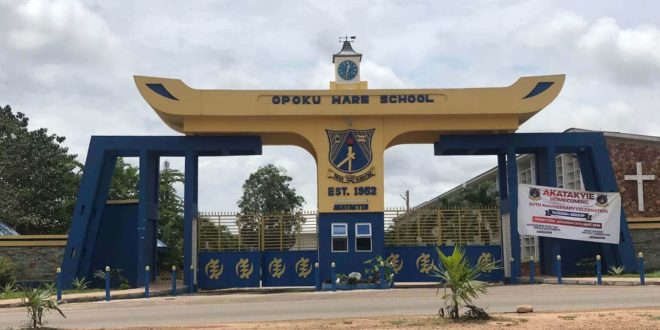 Three students of Opoku Ware School (OWASS) have been arrested in Kumasi for armed robbery.

The three students – Akwasi Adu Donkor, Raphael Owusu Appiah and Kwadwo Osei Asubonteng – were arrested by the Kumasi Central police for attacking a taxi driver and snatching his taxi cab at gunpoint on Thursday, August 11.

School authorities were informed by the police Friday dawn and it was confirmed that the suspects were indeed students of Opoku Ware School.

“It is on record that the three suspects had been withdrawn from the boarding house,” the school said in a statement on Tuesday, August 16.

“Akwasi Adu Donkor and Asubonteng Osei Kwadwo were withdrawn from the boarding house on the same day for the following offences: Breaking bounds at night, Wearing unprescribed attire in the school and Fighting in the school.”

The statement signed by the Secretary to the School’s Disciplinary Committee, Bismark Agyemang Duah, cited several infractions by these students.

The two are said to be habitual absentees, assault fellow students and steal on countless occasions.

“Owusu Appiah Raphael was also withdrawn from the boarding house for stealing on countless occasions from his colleagues at the dormitory. After this incident, he and other four students appeared before the D.C. for wrongful entry into someone’s house at TUC. He has also been hiding in the dormitory despite his withdrawal from the boarding house.”

According to the school authorities, every effort to reform these students has proven futile.

“Their parents have been invited to the school on several occasions to discuss the behaviour of their wards with them,” the school noted.

“It is sad to report that the father of Raphael Owusu Appiah insulted the then Assistant Headmaster, Mr. Akwasi Oduro Boateng, and nearly fought him. He claimed the Assistant headmaster hated his son and wanted him to be withdrawn from the school.”

According the statement, authorities were sad that these boys did not take heed to all the advice given to them.

“We would like to state emphatically that the boys are our students but at the time the incident occurred, they had closed from school and were supposed to be in the custody of their parents.”