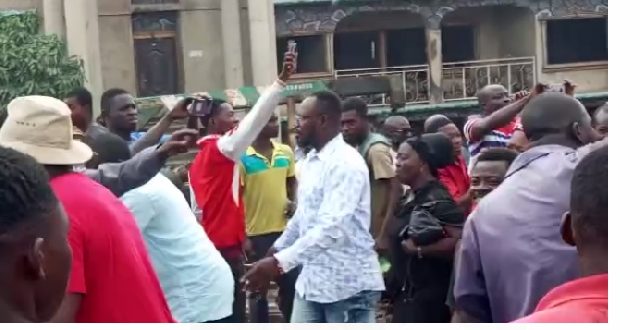 Some artisans at the Suame Magazine in the Suame Municipality of the Ashanti region today, Monday, July 18, 2022, hooted and pelted their Member of Parliament Osei Kyei Mensah Bonsu with sachets of water for allegedly denying them development.

Reports reaching MyGhanaMedia.com  indicate that the Member of Parliament for Suame Constituency and Minister for Parliamentary Affairs,  Mr Kyei Mensah Bonsu during a work visit to the industrial enclave was greeted with the shock of his life when the angry artisans hooted at him chanting war songs to register their displeasure over what they describe as lack of infrastructural development in the area.

The MP who is also the Majority Leader of Parliament had gone to inspect the abandoned Suame highway which the artisans said had claimed one life due to its deteriorated nature.

It would be recalled that the artisans last Friday blocked the highway and demonstrated against the MP and the government for not ensuring that the road was fixed.

They warned of another demonstration today if the contractor does not return to the road to have it fixed.

Watch the video below for more details

The contractor has returned to the road which the Minister for Parliamentary Affairs had gone to inspect today.

The angry artisans upon hearing of the arrival of the MP thronged the highway and started hooting, pelting him with sachets of water, and subsequently chased him away.

The Suame legislator who was accompanied by the Municipality Chief Executive for the area, Mr. Maxwell Ofosu Boakye, and some party members had to run and seek protection on top of a storey building at Suame Tarkwa Makro.

The artisans are still gathered in front of the building and chanting although police have been deployed to the scene to calm down nerves.

I'm Adwenpa-Hene |Blogger & Broadcaster Journalist. I am the CEO and manager of this noble website. I publish on Entertainment, Sports, Politics, Lifestyle, and Technology. You can also follow Us on : YouTube Channel - My Ghana Media TV, Facebook - MyghanaMedia TV , Twitter - @MyGhanamedia2 & Instagram - My Ghana Media TV. Email Address: [email protected] Contact Us: 0200818719
@@MyGhanamedia2
Previous Holding Together And Working Together, NPP Will Break The Eight-Year Power Jinx –  Sir John Tells New Executives.
Next Henry Osei Akoto To New NPP Executives: Congratulations But You Will Lose 2024 Polls